That was a tough race for me and it will be fair to say that I struggled! Katrina came with me and we had a good morning out! The trains from Paisley to Glasgow were not running so we went on the replacement buses.

We arrived about 9.40am at George Square and I got ready for the run. I was feeling good but I’d been concerned about my right foot for the last few days. I’d been taking some ibuprofen to see if that would help. I could feel it and knew it would be sore on the run but I’d be okay. I met John McLaughlin before the race and we agreed to run together early on as we were both aiming for a sub 1.25 time. John thought he would have to hang on to me but it was the other way round and I couldn’t!!

I was impressed with the start. The colour system seemed to work well. With a few minutes to go I caught up with Ian and Thomas and saw a few other friends as well. The gun went off and Jimmy Saville started the race. Very quickly I was into my running and was following right with John. The first mile was uphill and half way up my foot was feeling quite sore. I tried to find a running action that didn’t hurt so much but I was conscious of it all the time.

I was right with John at the first mile marker in 6.25 and felt all right. John then seemed to push the pace and I was working harder than I wanted to stay with him. I was a few strides behind at mile 2 in 6.14 but after that I let him go and tried to settle into my own pace.

Over the Kingston Bridge and heading towards Bellahouston Park. I was holing my position all right but there were runners catching me and going past which made me realise that I was slowing. Sure enough my splits from mile 5 onwards were nearer 6.45 than the 6.30 I was aiming for.

I felt I was struggling from about mile 6 and working hard to keep my position. I was concentrating hard on my breathing and action but it is so hard when you feel you are slipping down through the field. I was regreting going off too quick and feeling a bit sorry for myself regarding my foot! But I hung in there and tried to concentrate on getting to the next mile marker. They had a piper at each mile so that was great. Also there was a good number of supporters out encouraging the runners so that was a help as well.

A number of Kilbarchan friends were out watching so they gave me a shout. Plus having a vest with Kilbarchan on helps as people shout, ‘Go Kilbarchan go’.

I was pleased to see the 10 miles marker but not so happy to see that it had taken me 1.06.26 rather than the 1.05 I’d been aiming for. But to be honest a good time was out of the window by then and I was just trying to keep it together!

I kept the same pace going over the last three miles with some runners going past me and me catching one or two. It was great to see the finish line and get through the line in 1.27.38.

John was waiting for me and I congratulated him on his excellent 1.24.50. Also I saw Thomas and Gavin who ran in together in 1.21 something so they had good runs as well. 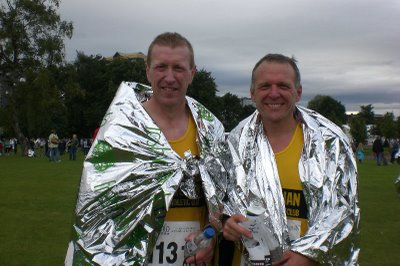 With John McLaughlin after the race

After finishing my foot was really sore to walk on and I’ve decided I need to give it a few days rest if not the whole week. It’s not going to get any better by running on it so I need to be sensible. Loch Ness is four weeks away and I’d rather run that with my foot sorted out than sore again. So my target for Loch Ness will be a realistic sub 3.15 I think!

I’m glad I did the race but it was fustrating not being able to run as freely as I’d like. I can tell when I’ve run tense as my right arm is sore afterwards and it was today! I run better when I can relax and pace myself better.

Congratulations to Hayley Haining who finished third in the Women’s race.

Katrina took some video clips so I’ll put those together in the next day or so. I’ll have some time as I won’t be running!

This entry was posted in Glasgow Half Marathon. Bookmark the permalink.

2 Responses to Glasgow Half Marathon Report