My foot has been a bit sore since Saturday but I decided to run tonight anyway and see how I managed. I pushed it hard thorughout the session and my foot felt fine. I can feel it now I’m home but I was surprised how easy it felt on the run. The cycle track was a bit slippy but not too bad. Michael and Kerry Lang set the pace tonight and I was trying my hardest to hang on to them. I managed it for the first 2 sets of 5mins but they ran away from me on the last two even though I ran them faster!

Here are my distances and pace for each effort …

So I ran a total of 4.90miles for the 30mins of on running. John McL reckons 5miles is a good bench mark for the session so I wasn’t too far off.

On the way back I had a chat with Kerry who is one of our stars at Kilbarchan. Kerry is an triathlete and I was asking her what her main aim is for next year. The worlds in Australia was the answer. Plus she’d like to get into the top 20 in the world. I look forward to following her progress over the coming year. 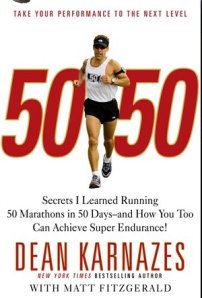 I have finished Dean Karnazes’ book 50/50. I really enjoyed it and found it helpful. He goes through each of the 50 marathons he ran in 50 consecutive days in the 50 states of America. That is some achievement to be able to run 26.2 miles day after day. He averaged around 4hrs for each marathon and his fastest was his last the New York Marathon when he finished in 3hrs 00mins 30secs! He writes about the people who ran with him, how he was feeling and how it all came together. The more I read the more I appreciated how tough this must have been.

Also through the book he adds in a lot of good practical and common sense about running in general and ultra running in particular. I read this bit just after I’d fallen on our training run a week last Sunday ….

‘Running is not a contact sport – at least, not usually. But every once in a while, a rare, freakish moment of brusing or bloodshed occurs, usually quite suddently like when you slip and fall on a patch of ice. Runners have a high tolerance for pain, but we prefer the slow-burning pain of creeping fatigue to the hard-hitting pain of sudden impact. If we had any taste for the latter, we would have taken up rugby or karate.’

I realise that Dean is not everyone’s cup of tea but I have really enjoyed his two books so far and keep an eye out on his blog as well. I would recommend the book as I found it really interesting and helpful.

I can’t sign off without mentioning Everton’s game yesterday (Debs look away now!). I went to Katrina’s gym as I don’t have sky. Everton were all over Aston Villa yet found themselves 2-1 down with just 3 mins of added time to go. In the 3rd minute Lescott scores a great goal to snatch a well deserved point. The sound was off on the TV in the gym as there was some health and safety training going on and I looked up in dismay to see Luke Young through with just Howard to beat … and he did. Gutted!

This entry was posted in Club run, Dean Karnazes, Everton. Bookmark the permalink.