Hill Run up and down past Robertson’s Car Park

Today I was keen to return to my fortnightly hill run. Last year when I was trying to combat DOMS (Delayed Onset of Muscle Soreness) I realised that I needed to run more downhills to really train my quads. It seemed to work last year as I didn’t have the same problems so I’m planning to keep my training as similar to last year as possible. So today it was my run and down the steepest hill I can find close to home.

As you can see from the profile I have an easy mile to the bottom of the hill then a tough steep climb up to Robertson’s Car Park and then another unduling mile before turning round and running back. The key part of the run is the long down hill mile on the way back. I try and work on my technique – leaning forward and trying to relax as much as possible. I have a tendency to brake which I think causes more damage.

Today it was a bit wet and cold setting off so I wore my running jacket and my new race buff which Dario gave me yesterday. For the first few minutes my legs felt I bit sore but I remembered I ran over 13miles last night! So I took it easy but soon settled into the run and found the hill okay.

As I was running I was thinking about some of the stuff I heard last night at the whw inpiration evening. I’ll mention one thing now. Dr Chris Ellis started his talk by referring to the weighing he did in last years race. He showed this slide for the first 20 finishers …. 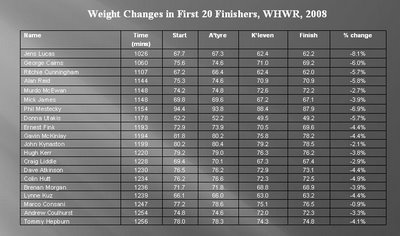 I’d not seen any figures and how much weight I’d lost so I was interested to see the results. A couple of things stood out for me.

Firstly I was the third heaviest for those who finished in the top 20. The heaviest was Phil M who I reckon wore weights under his clothes at the weigh in and then Gavin who is 6foot 5inches.

And secondly I was the 2nd lowest for percentage body weight lost. The least (0.9%) was Marco and due to injury he had to walk the last 10miles or so and probably kept eating to keep him going!

So what can I learn?

Firstly I could do with being a bit lighter but I don’t suppose I can lose enough to make that much of a difference.

Secondly maybe I should eat less on the run as the top 10 all seem to lose over 4% of their body weight and I ‘only’ lost 2.1%!! Or maybe I wasn’t running fast enough and if I did I’d lose more weight!!

Dr Chris did say that initially he was concerned if a runner lost more than 4% of body weight but looking at these figures and similar results from the Comnrades Marathon the top guys seem to be able to cope with losing nearer to 8% and still run strongly. In last year’s whw race the person who lost the most weight was the winner – Jens Lucas (8.1%). Dr Chris also said that he is more concerned if a runner puts on weight during the run as this indicates real problems. If you want to hear the full talk it’s on the web page I set up.

There is obviously a lot more research and study to go into this but I do find it really interesting.

This entry was posted in Robertson's Car Park. Bookmark the permalink.