I really enjoyed this tough, hilly half marathon. Katrina & I left home just after 8.30am and arrived at Scone Airport a few minutes after 10am giving me plenty of time to get organised. I met John Kennedy in the registration hall and we had a good chat. John often joins us on our whw training runs and is a very good runner holding the record for the Devil’s.

I went for a quick warm up and met up with Ritchie Cunningham. Ritchie ran 180 miles over 4 days last weekend so not surprisingly he said his legs left tired! I still wasn’t expecting to see him in the race though. 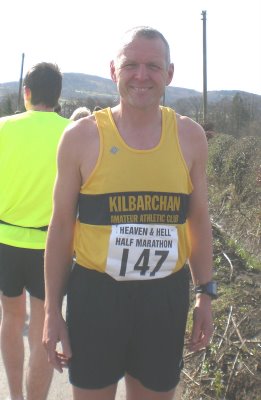 The weather was really good and even though it was very windy I decided to run in just my club vest. There seemed to be a decent turnout with over 200 runners. I was determined to try and set off steady as I knew from the profile that are two tough hills plus lots of smaller ups and downs. The main uphill is at 8 miles and lasts for 2.2 miles so I was keen to try and keep something in reserve for that.

We set off a few minutes after 11am and I found a few people to run with. Before the start a guy called Andy introduced himself. He runs with George Reid amongst others and is keen to do the whw race one day. In the race I spent the whole race chasing him. There was another guy who John Kennedy introduced me to. He is 55 and ran a 3.05 marathon recently so I knew if I could stay somewhere near him I’d be doing all right. I ran with him for the first 3 miles and then pushed ahead.

I was enjoying the challenge of the run and trying to stay comfortable. There was a long gradual hill at 5miles which I felt okay on and then a long downhill from 7miles. Even though I was trying my relaxed windmill technique I was almost caught by someone. I took some water at the 8mile station and then we turned left and the long 2mile climb began. There was a notice from the ‘devil’ to enjoy the hill! 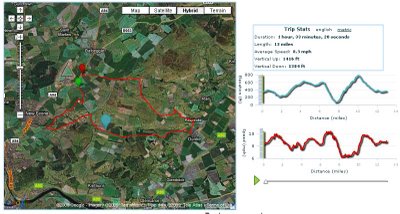 I kept a steady pace going the whole way, counting 100 breathes at a time. I was pleased to see the 9mile marker and then even more plesed to see the final hill to the top. I cuaght one runner, a lady but once we were on the downhill she caught me again!

I was calculating in my mind that I should be able to beat 1hr 35mins which had been my goal. Miles 11&12 were mostly downhill but the last mile was hard as it was right into the teeth of the wind. I was happy with my finishing time and run. 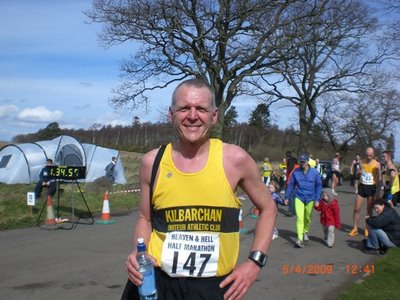 I spoke to John & Ritchie after the race and they both seemed happy with their races. It was a really well organised race with great food afterwards. I would do it again!

The day was rounded off well with news of another Everton win!!

This entry was posted in Heaven and Hell Half Marathon. Bookmark the permalink.