What a great night! After finishing the race at about 3.45pm I had a shower and then with Katrina headed over to the Station Hotel where friends were staying. We used Thomas & Silke’s room to get changed (thanks) and then went over for a meal at a local restaurant.

At 7.45pm we drove over to Ayr Town Hall and joined the celebrations of the 1st Annual SUMS Gala Ball. It was really fun to see friends who you normally only see in running gear dressed up in their best clothes.

Here are a few pictures of the hall … 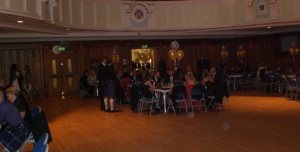 After a while the live band started up and the dancing started. Thankfully (for me) there was some Ceilidh dances which I really enjoy. Debs did drag me on the floor to dance which was an indication of things to come.

Murdo MacDonald and Tim Downie then took centre stage and we had the first part of the Prize Giving. Murdo brought on to the stage some of the race directors to give out the prizes which I thought was a really nice touch.

We started with the Female Super Vets. I’m afraid I didn’t get my camera in action quick enough and some of them weren’t present so I don’t have photos but the order was …

We then moved on to the Male Super Vets. I thought I’d done enough to get 3rd place but I was thinking I’ll feel such a fool if I haven’t so I was grateful when Murdo called me up!

Murdo then presented two special prizes to those who had done the most races. Ray McCurdy and Sandra McDougall (below) who both ran 7 of the races. Well done to them.

We then moved on to the Female and Male Vets Prizes.

Rosie Bell who has had an excellent year finished 3rd …

In second place was Gail Murdock who wasn’t present.

I think she looks happy! Debs has had an amazing year since getting back into ultra running after Cairns birth. Starting with the Devil’s last year she has had superb runs at the Fling, whw, Devil’s and RAW and I should know as she’s gone past me in three of the four of them!! It would have been all four but I didn’t run the Devils!

Next up was the Male Vets. In 3rd place was Gavin Harvie and in 2nd place after a year when he finally did justice to his running ability, Thomas Loehndorf

Thomas is always a popular winner as he has had to work so hard to get there but this year has been an excellent one with pb’s in all three races on the whw.

The winner of the Male Vets was George Cairns who finished 3rd in the RAW race but had to head home.

Ian Beattie then came on stage and presented whw 2010 winner Richie Cunningham with his whw trophy and a framed picture taken by Alan Young. Richie was a very popular winner of the whw and the applause he received reflected that.

Richie and Ian milk the applause!

Murdo explained a little of how the SUMS started. Initially Murdo and Tim thought they would do a trial this year and start it properly in 2011. They wanted a race in the North East and so rang George Reid would he be interested in starting a race. Within 24hrs George had applied for permission, set up a web site and the Deeside 33 was born.

So if George can do it then the series could start this year. So to thank George for getting the ball rolling he was presented with a crystal glass …

I think we had a break at this point for some more dances before coming back to the final part of the prizes.

More race directors were introduced to give out the final two Categories Overall Female and Overall Male Winners.

In 3rd place for the Ladies was Jamie Aarons.

In 2nd place was someone who I have run a lot with over the last two years and I’ve seen first hand just how much she has improved …. Sharon Law.

I foolishly challenged Sharon to a competition over the four races we were both doing. I lost 3-1 and I only got the 1 because Sharon had to pull out of the Hardmoors 55 with hypothermia!!

The winner of the Overall Female Category ….. Lucy Colquhoun

Lucy had to hobble to tthe stage as she has a very sore knee but that didn’t stop her finishing 6th in the RAW race.

We then moved on to the final category Overall Male. 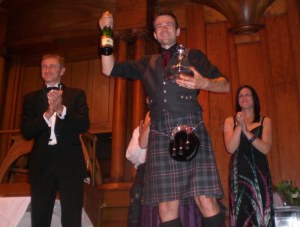 Marco is one of my training partners and we have spent many hours running together chatting about tactics and races as well as all sorts of other things. I know how hard Marco has worked to get things right and he fully deserved this award. The Consani household will need a bigger house to home all their trophies.

In 2nd place was Jack Brown who unfortunately injured two toes in work on Friday and so couldn’t run in the RAW race. But he had enough points already to secure his 2nd place.

The winner of the Overall Male Category was Grant Jeans after winning the Deeside 33, Stride and RAW and 2nd in the Glasgow to Edinburgh double Marathon. 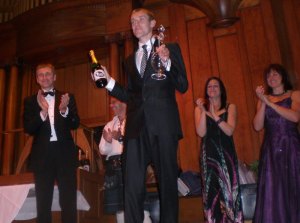 For the final award of the night Adrian Stott came on stage to introduce a special prize. It is the Dario Melaragni achievement Award. It is to be presented each year to someone who has shown a lifetime of achievement and commitment to ultra running.

Gilian, Dario’s wife, was warmly welcomed to the stage to present the prize. The first winner of this award was Don Ritchie. Adrian gave a brief summary of his achievements which are simply mind blowing. I can’t remember all the details so here is a summary taken from an article Adrian wrote about ultra training …

Ritchie was brought up in the club/harrier tradition, running for a committed club with a cross country and track background with a 10km pb of 30.54 and a marathon pb of 2.19.34. He was inspired by fellow Aberdonian Alistair Wood to have a go at the classic 55 mile (90km) London to Brighton race, an event he won twice before turning his attention to what was, in the mid-late 70s, becoming the standard European ultra distance of 100km.

The rest, as they say, is history. In 1978 at Crystal Palace track, Ritchie ran 6 hours 10 min 20 secs for 100k, a time that is still the fastest time recorded for the distance. Almost 30 years later the IAAF registered road best is only 6.13.33 despite many attempts, by some formidable competitors with better marathon times, to better Donald’s time.

Ritchie also recorded a string of victories in major 100km events across Europe in the days before there were recognised championships and set world records at every distance from 50km to 200km on both road and track.

Don came on stage to raptuous applause and was a very worthy winner.

So a tremendous night. A massive thanks to all those involved in putting it together especially Murdo and Tim.

A final photo of Bill Hutchison, John Kennedy amd myself ….

This entry was posted in SUMS Gala Ball. Bookmark the permalink.