Tonight I had a good run with Kilbarchan on our regular Wednesday night run. There were 6 of us in our group and Robert took us on a great run up on teh Braes.

I knew it would be a hilly route and I was a little concerned about how my calf would cope. It’s been feeling better each day and felt that I needed to test it before Sunday’s run.  I bought some calf guards and decided to wear them for the run.

Here is our route and elevation … 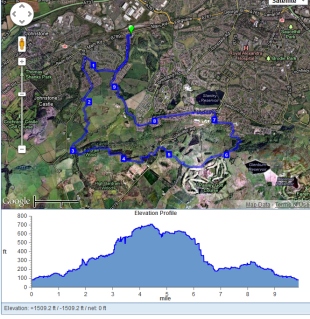 I took the first part of the hill steady but as the hill went on I was encouraged that my calf was fine so pushed a bit harder on the top half.  I was on my toes for all the way up and my calf was absolutely fine so it’s all good news.

I really enjoyed the run and feel a lot better than I did a week ago.

I had an interesting phone call earlier in the evening.  Louise from Real Relay ran asking whether I would like to be involved in their relay. I had seen it on facebook and thought it would be fun to be involved but wasn’t sure how it would work.

Here are the details …

The Endurancelife Real Relay is an exciting attempt to follow the entire route of the official Olympic Torch around the British Isles in one continuous non-stop journey, running every step of the way.  Starting out from Land’s End at midnight on Monday 28 May, ten days behind the official Olympic Torch, the Real Relay will involve hundreds of runners from across the British Isles running through the day and night on an 8000 mile mission to reach London in time for the Olympic Games opening ceremony. We’re calling on runners from all over the British Isles to join the relay by signing up to run one or more of the stages (below) and help achieve one of the greatest Olympic endeavours of all time.

Louise was looking for volunteers to run 2 legs, Dunlop to Lochwinnoch at 23.25 tomorrow night or Kilmacolm to Bishopton at 02.30 Friday 15th June.  When she said that some people have been doing it in pairs sharing the run and the driving that I wondered whether Katrina would  fancy it.

She did so we’ve signied up to run the Kilmacolm to Bishopton leg.  So we’ll be running at 2.30am tomorrow night!!  You’ll be able to read all about it here.  I need to work out a route which goes via Port Glasgow.

There are lots of other legs available so if you’re interested have a look at the web site.

This entry was posted in Club run, Real Relay. Bookmark the permalink.