This morning I wanted to do an off road run on the Braes. Initially Katrina and Emma were going to join me but in the end both decided to have a longer lie in. Katrina had a good excuse as we didn’t get home from Lucy’s house warming until 1.30am

I thought I’d do about 8miles but was going well and decided to run an extra couple of miles. I must admit there were two reasons. One was that if it’s 10miles I can put it down as a longer run on my training plan and secondly it would mean I’ve run 50miles for the week.

I took the car up to Robertson’s car park and ran my loops from there.

I have another hard week of training for this week. The main run will be Friday night’s run. As I’ll be running for about 7 hours through the night in the Lakeland 100 race I wanted to have a night run as my last long run before I start my taper.

There are a few friends keen to join me. We’ll start at Balmaha at 11pm on Friday night. We’ll run to Rowardennan (7.70miles), up and down Ben Lomond (7.6miles) and then back to Balmaha. Total mileage 23miles.

On the way home from the whw race last Monday Katrina said to me, ‘I’d like to do the Devil’s race’. I assumed she was taking about next year but no this year. So she sent off her application form. Katrina is on the reserve list (number 53 but quite a few have places) but I’m sure she’ll get a place even if it means turning up the day. 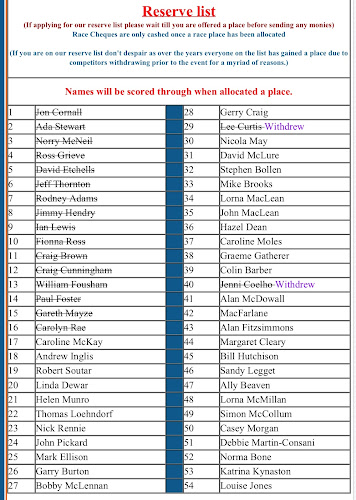 The race is a week after the Lakeland 100 race so I hope Katrina doesn’t actually need me to run with her!

This post has been written on my iPad. Marco gave me some lessons last night including introducing me to blogsy so this is my first attempt using it.

This entry was posted in Devil o the Highlands race, Gleniffer Braes. Bookmark the permalink.