Yesterday Katrina and I joined a small group of harder souls for our annual 11mile handicap race on a tough circuit starting and finishing from Kilbarchan Park.

I have the ‘honour’ of sorting out the handicaps and was slightly embarrassed that Katrina won the 4.2mile Christmas Handicap a week or so ago. This time I thought I’d been very ungenerous to Katrina and assumed that someone would catch her …. hopefully me!

We only had 7 individual runners and 2 relay teams.  Here is a picture of the group before the started …

Katrina set off with 8mins on the clock and I was at 17mins so I had 9mins over 11miles to catch her. Often when we do a race together I’m on average 1min a mile faster so thought I had a chance!

The first 4 miles are mostly uphill and quite a challenge. I took it steady and was feeling okay.  Here I am at the 2.75mile point … 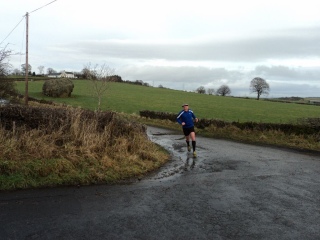 I had caught Robin who started 1 min ahead of me but from then on I was on my own.  I’d had a head cold for a few days and feeling a bit rough but generally it was good to be out and enjoying the run.

When I arrived at Bridge of Weir with just over 2miles to go Richard said that Katrina was 4-5mins ahead so I knew I wasn’t going to catch her!

Meanwhile I was hearing that Katrina was running really well and ended up winning again!  Donald almost caught her but not quite!

So congratulations to Katrina but I think I should retire as the handicap master! Katrina ran the hilly 10.56miles in 1hr 25mins 02secs.  My time of 1hr 19mins 40secs was a couple of mins slower than last year and 10mins slower than my best in 2008.

Here are the full results ….

We were both really cold after the run so it was good to get home and enjoy a hot shower.

We had been invited to Thomas & Silke’s to bring in the New Year with them, Marco & Debs and Neal & Caroline. We are home now having had a great time.

Thomas, Marco & I ran an easy 5mile run this morning along the costal road from Greenock to the Lighthouse and back.  Well I say easy I reckon it was a lot easier for Thomas & Marco than me! My legs were feeling the effects of yesterday’s race.

Thomas & Silke made a West Highland Way Game which was great fun. Here are some photos …. 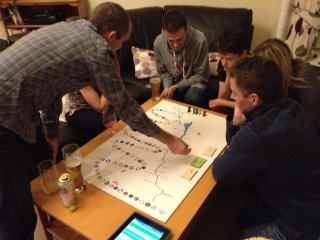 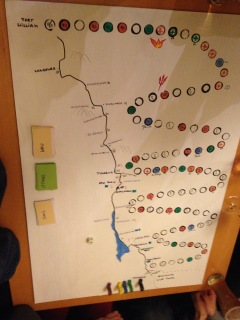 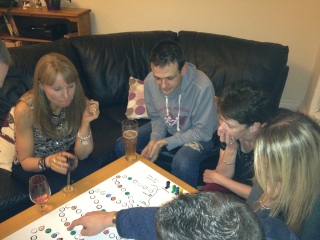