Sunday was the Commonwealth Marathon and I had the privilege of being involved as a volunteer. My role was one of the Results Technology team. There were 8 immediate timing posts every 5k.  Longines, the games timing company, provided all the timing and we were there as a back up.

On Saturday we had a training session with Longines where basically they showed us how to use the hand held timing machine.  We had to press the right button each time a runner went past! The idea was also to write down the number of each runner and match them with a time.  It proved to be a lot harder than it looked!!

Here is a summary of my day ….

5am Travel to Glasgow City centre by Motorbike

5.25am Parked at Boswell Street and walked to Commonwealth House on Albion Street

5.45am Signed in and collected my packed lunch

6.00am Met Hannah, our manager, and decided it would be easier to go on my motorbike to Bellahouston Park where I was to man the 30k timing post

6.15am Walked back to my bike and drove to Craigton PS where I parked my bike

6.30am Walked to Bellahouston Park and found my tent and timing equipment

6.45am Waited for the marathon to start!! Chatted to the park keeper and marshals who were on duty at a crossing. 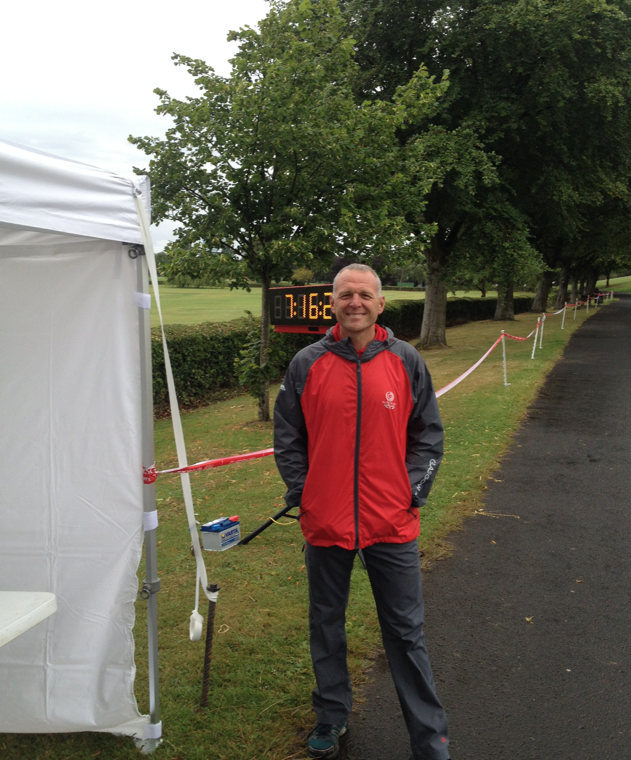 8.30am Katrina and Tracey arrived and I asked them to help me write the numbers down. 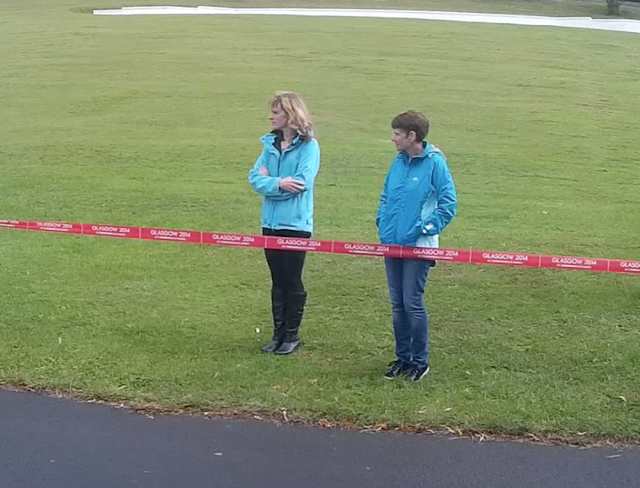 8.45am Neal, Caroline and Neal’s parents, Steven & Kirsty, Chris, Norman and other arrived to watch from our position

9.02am Men’s marathon started and our clock sprang into action

9.30am The Men ran past on the first lap (we were at the 9k mark). It was great to cheer on Derek Hawkins who runs for Kilbarchan. Neal took great delight in cheering on Steve Way who had been interviewed on Marathon Talk.

10.10am The leading women with Susan Partridge ran past on their first lap. They had started at 9.30am.

Again we gave a special cheer to Haley Haining (Kilbarachan) ….

10.37am The Men came round for their second lap. There were 10 in the leading group. I took the times on my handheld machine while Katrina and Tracey wrote down the numbers. Part of the problem was the numbers were on the runners’ backs. They had their names on the front.

Derek went through in 11th place and was looking strong. He finished 1st Brit in 9th place so must have caught a couple of the runners ahead …..

Steve Way was not too far behind Derek and finished 10th breaking the V40 GB record in the process ….

11.20am The women came through. The 2 Kenyans were leading (photo from Steven Hill) …..

Hayley was also running well and gave us an acknowledgement. It looked like she was working hard and did well to finish 13th in 2:40:40 …..

11.45am The final runner came through followed by the guy from Longines to collect up the equipment.

So a great morning with some excellent performances. Final photo taken by Steven Hill ….

This entry was posted in Glasgow 2014. Bookmark the permalink.