I last ran in the National Cross Country in 2008 and I was looking forward to seeing how I got on this year. The weather forecast wasn’t very promising and as I drove to Falkirk with friends Steven and David it looked like the forecast was correct!

We arrived just before 1pm so had plenty of time to have a warm up and get ready for the 2.30pm start. I met up with Neal Gibson and we headed off for a warm up together just as the women’s race was starting.

We stopped a few times to cheer on Caroline and anyone else we recognised.  As we ran round Neal was saying he has struggled to shake off a cold. I thought it was another of his excuses and said so! He replied that his legs were feeling great so I didn’t expect to see him in the race.

The wind and rain weren’t letting up much so I sheltered in the Kilbarchan Team Tent and got ready for the race.  It was a priviledge to share it with Callum Hawkins who won the race last year. We did have a funny moment about 10mins before the start as Callum couldn’t find his number. We looked around the tent and found it just in time!!

The course has changed a bit since I did in 2008 with the start going at 90 degrees to the original way. There was a good buzz just before the start then everyone setting off on the hooter.

I was keen to set off steady and by starting down the field it forced me to do that as it was hard to overtake people on the first 10mins or so. After that the field spread out and I was able to run as fast as I wanted and could!

I used the first lap to try and work out the best line. I tended to go quite a bit wider than most as I found the grassy parts had more grip than the mud which was very thick for the majority of the route.

Friends Ken and Sue were marshalling around the Lake so it great to see them and their friendly cheer was welcome. The next big cheer was going past the Kilbarchan tent on one of the short hills and Caroline, Susan and children gave me a cheer at the end of each lap.

I heard my name being cheered but to be honest I had my head down and I was working as hard as I could. Kenneth Philips took this photo …

As I came round to complete lap 1 I could Neal not too far ahead. I reasoned that I must be catching him as I’d not seen him earlier so that gave me a target to aim for. I slowly caught him up and went past on the hill at the Kilbarchan tent.

Donald Petrie took this one …

Once I was past Neal I tried to keep the pace up and I slowly caught other runners and maybe 1 or 2 went past me but I felt I was moving as well as anyone around me.

There is a really tricky muddy hill near the end of the lap and I struggled to get up it each time. The first lap I went to the left and that was useless but on the 2nd and 3rd laps I went to the right and that was slightly easier. At least I didn’t have to walk.

Donald took another photo as I finished lap 2 …. 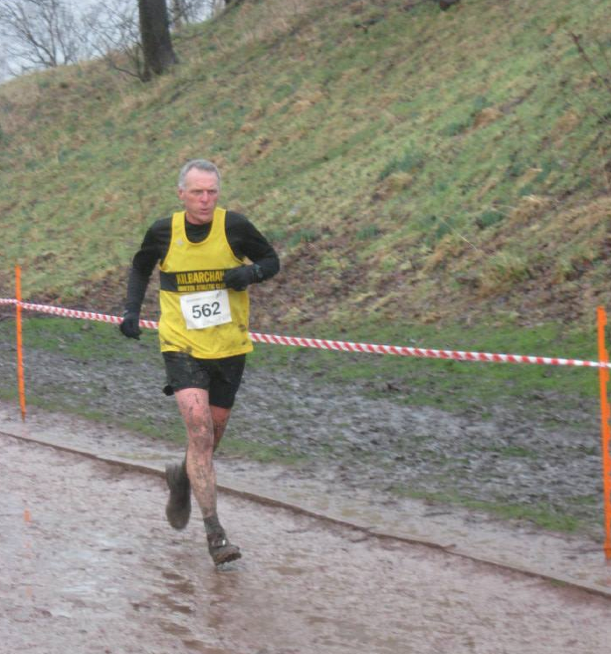 Sandra McDougall took this photo at the start of lap 3 (or it might be lap 2?) which shows just how muddy it was. 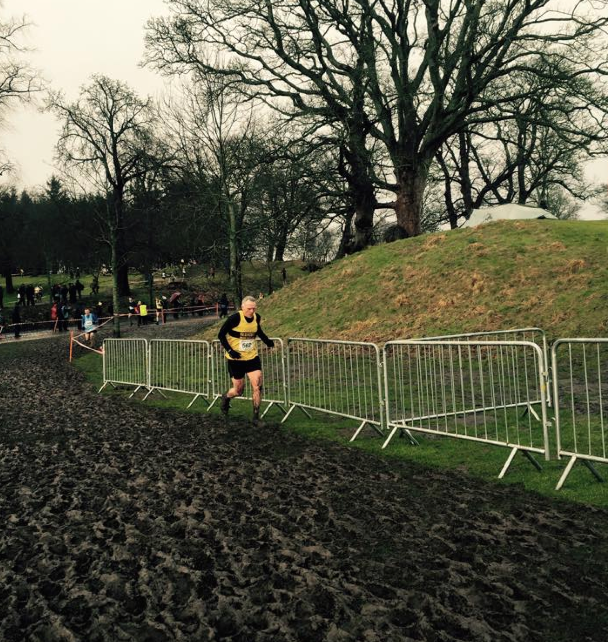 On the third lap I tried to push as hard as I could and went past another runner or two as we ran alongside the Lake. I suspected Neal wasn’t too far behind and sure enough he wasn’t.  Kenneth took a photo of Neal chasing me!

A few times I could hear people shouting ‘Come on Giffnock’ so I knew he was close! I tried to push as hard as I could but knew that if Neal was anywhere near me on the final run in then I could expect him to push past me.

Once we got to the final push I ran as hard as I could but suddenly Neal went past. Donald took a photo just before Neal went past but I like this one as I’m ahead! In fact I’m using it as my Facebook profile photo!! 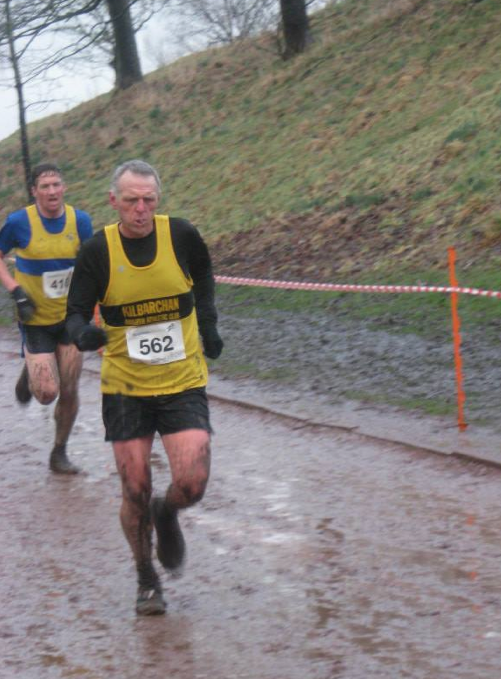 Neal went past with less than 50 yards to go but didn’t get too far ahead so I decided to have one more go and pushed as hard as I could. I came alongside and the pair of us sprinted to the line as if an Olympic Gold Medal was at stake!!

I was really pleased with my run and felt I couldn’t have gone any faster! My HR graph shows a steady rate of 158 for the whole race. I’m not quite sure what was going on for the first few minutes!

My next race is the Inverness Half Marathon in 2 weeks. I went for a recovery run tonight after work. It was very windy and wet but my legs felt fine which was encouraging!

This entry was posted in Cross Country. Bookmark the permalink.