Supporting Katrina as she runs the London Marathon

This past weekend was all about supporting Katrina as she ran the Virgin Money London marathon but I still needed to get a few runs in!

I ran my regular loop around Pollok Park on Friday lunchtime. We drove down to stay with Katrina’s brother and family who live near Leek on Friday night.  On Saturday I went for an early morning run before we drove down to London.

We stayed in our camper car at Lee Valley Campsite which was ideal as it was just a 30min train ride to central London.

We met Neal and Caroline who had been at the Expo for a few hours.  I had a good chat with Brett on the Sketchers stall. I offered to do a review of their shoes on my blog if he is interested. He took my details and said he would get back to me so we’ll see if anything comes from that.

We went to the expert’s corner and it was good to listen to Mark Yelling and others as they gave lots of good advice about running the London Marathon.

Katrina had been looking forward to running the London Marathon after she got a good for age place after her 3.42 in Manchester last year but things haven’t fully gone to plan as her knee has been sore which has made the training harder to enjoy. She decided not to be too worried about time and try and enjoy the day.

We set off for the start on Sunday at 7.30am catching the bus, train, underground and train to Maze Hill for the Green start. It took about 90mins from campsite to the start so not too bad.

There were lots of runners on the train so it was good to chat to some of them. One lady we were chatting to was hoping to finish by 6pm which would be 7hrs 40mins or so.

Katrina queued at the Maze Hill station for a ‘proper’ loo and we just got to the green start in time to load her bag with hoody for the end. Time for a photo before she headed to the start. 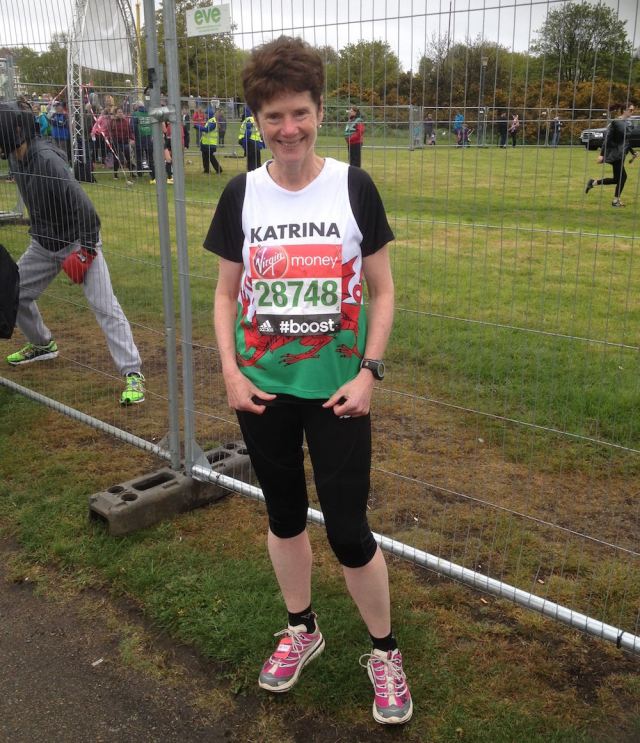 The Welsh Dragon vest was her idea and putting her name on mine! Katrina said that both worked really well as she got lots of shout outs throughout the race.

Once I’d wished her a great race I headed down to the 6 mile point to watch the runners come through. I watched in awe as the leading men went past! I gave a shout to Paula and Steve Way then scanned the runners for anyone I recognised.  I saw Neal right on the shoulder of the 3hr pacers, Gerry (who was easy to see as he was a 3:30 pacer with a big flag!), Shirley and a few others but I missed Katrina and Caroline.

I then decided to run to the 23mile point.  I followed the route as best I could but also ran along the river front as there were less people.

The London Marathon app was great to find out where Katrina and other friends were. I saw that Katrina went through half in 1.47 so I was hoping that if her knee was okay she might be close to 3.40.

I found a decent spot 400 yards past the 23 mile marker and started scanning the runners coming for Neal, Katrina and others.  The 3hr pacer came past with no Neal. He arrived 5 or 6 mins later. He heard my shout and gave me a sort of wave but he looked as though he was working hard.

Katrina came past just before the 3.45 pacer. I shouted her name a few times and she did hear me and smile which was a good sign.  I thought she looked as though she was running well.

I then ran alongside the route to the finish so I could be there at the meet and greet point.

It took a while for Katrina to come through. Her knee had been sore since mile 8 so she did really well to finish in 3:47:54 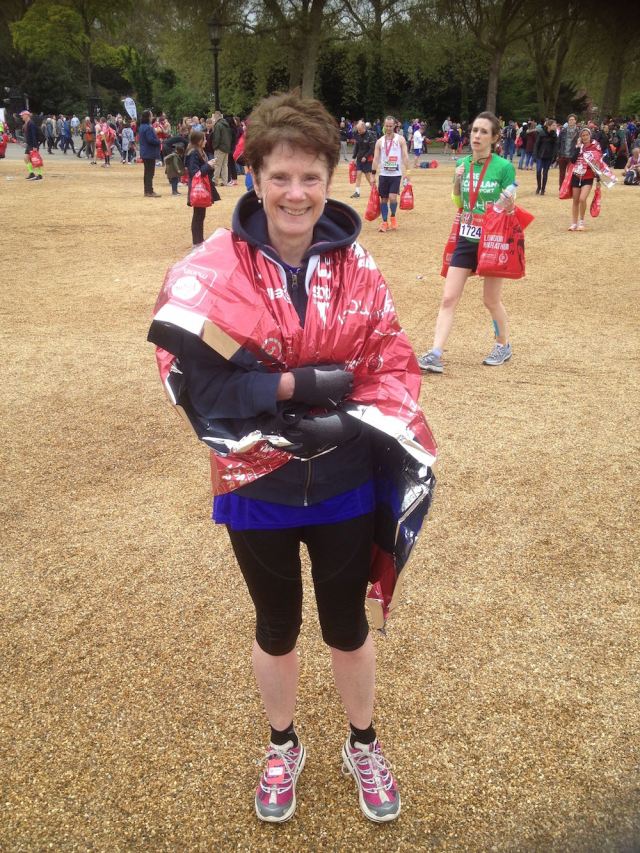 Congratulations Katrina …. on completing your fourth marathon.  She is saying it’s her last but we’ll see!

I enjoyed the experience of watching and being there but I have no desire to run it. I much prefer the open spaces of the trails!!

This entry was posted in London Marathon. Bookmark the permalink.

1 Response to Supporting Katrina as she runs the London Marathon