When I’m running the whw race this club race is too close to the event so I’ve only done it a couple of times. As I’m not running the whw this year I thought I’d have a go. Even though it was in the week after my big back to back in the Lakes I hoped I’d be okay.

I ran on Tuesday lunchtime and felt good. I made sure I kept my HR around 120 to make sure I didn’t work too hard!

Our Kilbarchan club organise this 5 mile Handicap race each year. I think it links in with various things that are going on in Bridge of Weir. The route is an out and back on the cycle track so you get to see everyone on the run.

Jason Pender was in charge of the handicaps this year. I’ve done that job for a few times and I know it’s not easy getting it right! There were 14 runners and I was off second last with Grant  on 19mins. Euan was behind us by a minute and Jennifer started a minute ahead of us.

I’ve not met Grant before so wasn’t sure whether he would be faster. He set off slightly ahead but I felt I wanted to run a bit faster so went past and pulled away.

I was breathing hard and counting my breathes. I glanced at my watch after a mile or so and saw I was at 6.33 pace which was fine. After about 1.5miles Euan went past looking strong. I thought a minute was maybe a bit too generous!

I saw the first runner coming back as I reached the 2 mile point and then from there to the turn point I saw all the other runners on their way back. Norman looked as though he was running well and went on to finish first. Jason took this photo at the turn.

Almost half way with Grant not far behind

I think I was about 16:54 at the half way point. As soon as I turned it did feel easier so I pushed as hard as I could all the way home.

I was more than happy with that and enjoyed taking part in the race. 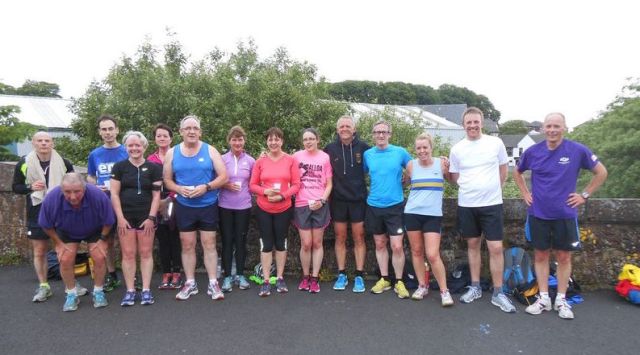 Well done to all the runners 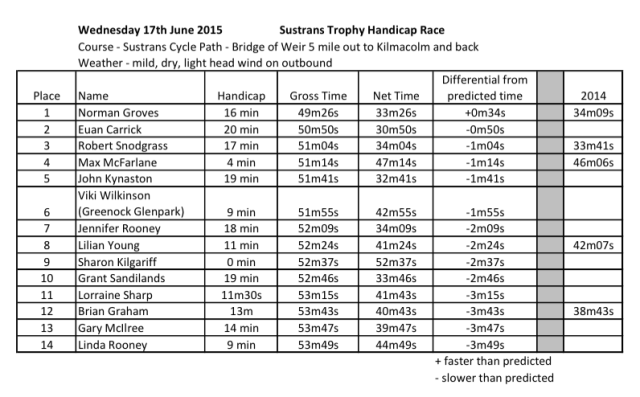 This entry was posted in Sustrans 5 mile Handicap Race. Bookmark the permalink.