Summary of runs this week

I’m enjoying just ticking over at the moment with no real plan except to run 4 times a week.

Sadly Katrina’s grandmother died a couple of weeks ago so we went down to South Wales for the funeral on Monday. We drive down on Sunday and stayed with friends in Llandrindod Wells.

I knew the only time for a run would be early before we headed down for the funeral. So I was up and out at 6.30am and ran south along the main road for 2 and a half miles before turning back. I didn’t have a head torch but there were street lights all the way so that was fine.

The funeral went well. Nana was 93 and had lived a full life so it was a fitting celebration of her life.  We left at 3.40pm and arrived home at 11.30pm!

I was able to run in the light at lunch time which was good. I very rarely listen to anything while I run but I decided because I’m just ticking over to listen to a podcast.

I’m glad I did as the talkultra podcast I listened to was excellent. Ian Corless interviewed a runner called Alex Campbell who had recently had a terrible fall while climbing and I was fascinated listening to how he was rescued and his recovery.

There was one bit when I was in tears as I ran along when he described going into the operating theatre not knowing whether he would get through it and his girl friend had rushed in to see him.

One of the big lessons he has learnt is the support and love of his friends and family and how he wants to make sure he keeps in touch and takes the time to speak to them.

I recommend listening to it.  An excellent podcast!

Another lunch time run but this time I wore my trail shoes and did my off road run around the park.

As I enjoyed listening to the podcast so much on Wednesday I listened to another talkultra podcast. This time one about the Everest Trail Race.

The 6 miles flew by as I transported to the Himalayas. Many years ago I did a trek to the base camp of Everest with my Dad so I could picture a number of the places they were talking about.

Katrina and I decided to volunteer for the parkrun at Linwood. To my shame it is the first time I have officially volunteered but it won’t be the last! I really enjoyed it.

I took some photos of the runners as they went past and cheered them on. I was impressed with how many thanked me for marshalling! 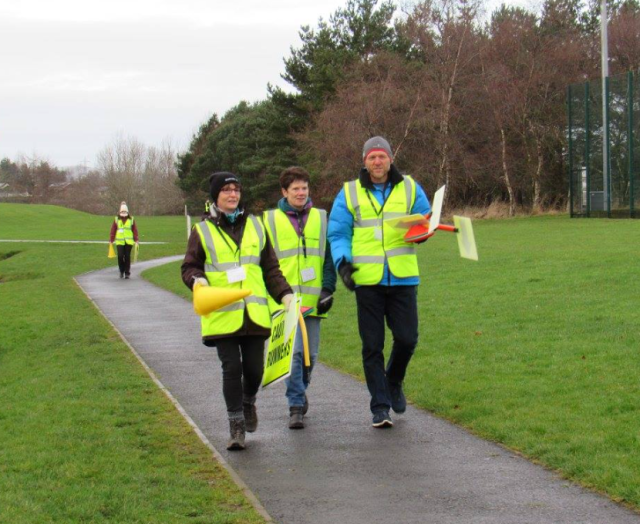 When I heard our friend Caroline McKay was planning to run a winter West Highland Way starting at 9pm on Friday 16th December we were keen to join her to give her some encouragement.

Initially her plan was for to arrive at Balmaha at 2.30pm so we planned to leave our car at Drymen and run along the road to Balmaha then join Caroline to run over Conic Hill to Drymen.

At lunchtime just before we were about to leave we heard that Caroline was going to be later partly because it turns out she was diverted a few times between Fort William and Lundavra means she had ran extra 5 miles!

So we changed our plans to drove to Balmaha for 2.30pm and ran out towards Rowendennan to meet Caroline and support runner Julie who were planning to leave Rowardennan at 5pm.

It was a lovely evening and we enjoyed the run out. We took a few photos while it was still light.

We ran past Sallochy and I thought we would meet Caroline in the next mile or so. We made it up the hill and down the other side where the photos above were taken and then we saw Caroline and Julie coming towards us. 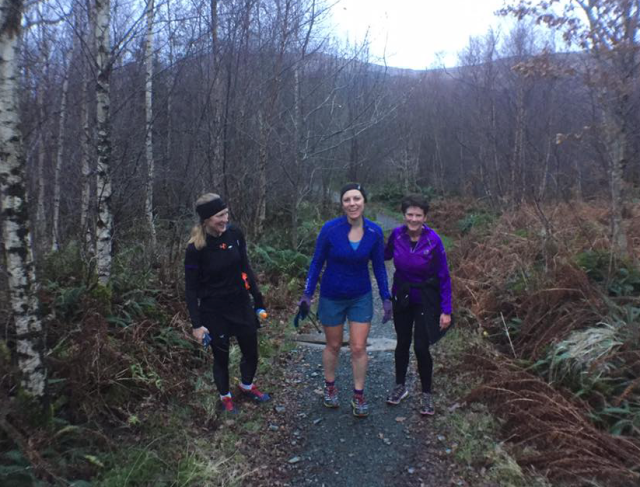 We had run 5.88 miles out so was able to give Caroline an accurate mileage back to Balmaha.

It was so good to see her running so well. Caroline explained about her tough start and some of the harder sections but she was obviously relishing the challenge and running well.

It was good to be able to run with her and hopefully give her some extra encouragement. A couple of times I sensed she as happy to ask a question and let me chat away which I was more than happy to do.

I took a photo as Caroline came down the steps before Sallochy before it got too dark.

With a mile or so to go before Balmaha we stopped to put on head torches. Caroline was quicker than us and it took us a few minutes of hard running to catch up with her!

We arrived at Balmaha at 4.50pm to meet Caroline’s Dad, boyfriend and other friends. We decided to stop there as Dawn was ready to head up Conic Hill.

While they ran on in the dark we went to the Oak Tree to get changed and enjoy a bowl of chips and a drink before heading home.

Later in the evening we discovered that Caroline finished around 10pm which was about 25hrs off running. She was hoping to do it under 24hrs which we all agreed she had done if you took off the hour or so it took her to do the extra 5 miles before Lundavra.

Congratulations Caroline and well done to your support team!

This entry was posted in Uncategorized, whw run. Bookmark the permalink.