I’ve not done our Christmas Handicap Race for 3 years so I decided to run this year. Katrina and Tracey also decided to have a go.

The route is a 2.1 mile loop around Johnstone which we run twice making 4.2 miles. 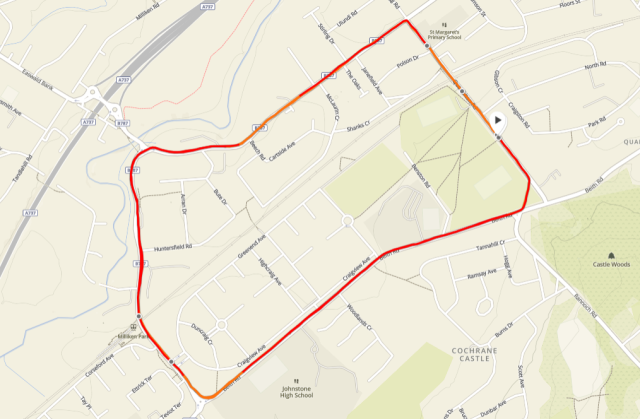 It is a handicap race with the slower runners going off first and the faster runners leaving last with the aim of everyone finishing at the same time. It never quite works out like that but it’s good fun chasing the runners ahead and waiting to be overtaken by the faster runners behind.

I was given a handicap of 17:15 which meant I started 3:45 behind Katrina and 7:00 behind Tracey. I wasn’t expecting the catch them which was just as well as I didn’t!!

I started with John Hannigan and Scott McGregor. John pushed on while Scott and I ran together for the first half of the first lap. I then pushed on a bit. I was keen to try and run both laps at the similar pace and I was able to achieve that with laps of 15:04 and 15:00.

I caught a few runners on the 2nd lap and was overtaken by a few runners as well. I caught John Hannigan near the end as he had a couple of walking breaks. I think he might have gone off too quick!

Everyone brings a prize so everyone goes home with a prize. Tracey was the first runner home was had first choice and a trophy.

Tracey with her trophy!

I’m 4 mins slower than 15 years ago which works out at 1min per mile!

Thanks to Jason Pender and the other marshals for organising the race.

This entry was posted in Kilbarchan Christmas Handicap Race. Bookmark the permalink.