I always find it helpful to review my races and write down some thoughts on what went right and what went wrong so I can learn for the future and hopefully not make the same mistake again though I’ve been too good with that on the navigation side!!

So here are a few things I have been thinking about since finishing the race later on Saturday night.

I was really happy with my physical preparation. I didn’t miss a single planned session since January and felt the balance of long runs, hill work, tempo and Fartlek was about right.  The key sessions besides the long runs were my weekly runs up and down Ben Lomond.

I really felt my quads were in good condition which gave me a lot of confidence going into the race. Another key thing in my preparation was losing some weight which I felt was very significant in achieving my goal of running under 30 hours.

My mental preparation was also good. I felt I knew the route really well and had a clear plan with running to heart rate.  My taper had been good and sensible. The only thing I was slightly worried about was whether my body clock had fully adjusted from my holiday in Indonesia.

All my kit was tried and tested and didn’t let me down.  Two things I did slightly differently was to put 2nd skin plasters on my little toes. It worked really well and they weren’t as bashed as they normally are on these long, long runs.

The other thing that worked well was using a visor and when it was hot draping my buff over the strap at the back so it hung over my neck keeping me cool. I was able to soak in any streams I passed which helped to keep my head and body cool.

I had a clear plan for the race and on the whole it worked well. In between checkpoints my main fuel was my Matrix Energy drink and Tailwind. I alternated between the two to give me some variety.

At the checkpoints I took flap jack, soup and sandwiches, rice pudding, stew etc. I planned ahead what I would take and basically took it and moved on.

My total stops for all the checkpoints was 34mins 31secs.  I reckon a lot of other runners stopped for that long in ONE checkpoint.  It meant I kept moving and didn’t stiffen up much.

The one mistake I made nutrition wise was filling my bottle with water for the last hour to Mardale Head instead of Tailwind. I had one with me but opted to keep it for later.  I really felt I paid for that with a lack of energy.

Before the race I was very happy that I knew the whole route and it was going to be easy finding my way round. The was correct for 95% of the route but the one error I made coming to Braithwaite cost me not only the 25mins it took to fight my way back but looking on my splits I pushed on to try and catch up which I reckon I paid for near the end.

In my last 3 long ultra races I have made similar mistakes which have cost me between 15-30mins each time.  I feel I have reccied the courses but still seem to find a way to mess up!

On the positive side I felt I dealt with it well and was able to put it behind me and not let in affect me too much.

I am really enjoying working on this aspect of my running. My aim these days is to start very conservatively and try and keep an even effort and hopefully pace throughout the race.

To do that I’ve been running to heart rate which I’ve found takes a lot of discipline. In this race for the first 11-12 hours I felt I was holding back trying to keep my heart rate around 125.  After 12hrs I didn’t worry about it too much as it was hard getting the level up to 125!

Not quite sure what happened around 21hrs except that was when I was going through my tough patch so maybe my hr was elevated. The 147 around 9hrs was when I missed the turn and worked too hard to get back on track!!

I was very interested to see how I got on in relation to the field. If I got my tactics right then I wanted to be further back in the field at Seathwaite and then work my way through the field. This is what happened ….

The overall position shows a gradual drop in places except at Braithwaite where I lost loads of places when I got lost and I lost a few places at the end.

The leg position was also encouraging. If my overall position was 60th then anything under that shows I was running better than my average. From CP6 to CP12 I was consistently well faster than 60th place.

The other thing I was interested to do was compare myself to Dave and Jonny who finished ahead of me and behind me. Our pace graphs tells its own story. 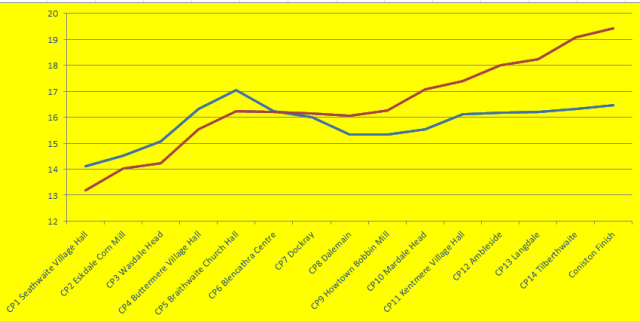 I think I pushed it a little too hard after my mistake coming to Braithwaite which I paid for a bit at the end. Maybe if I had eased off a little I could have finished a little stronger and kept my average pace on a straighter line.

I do wonder how much better I would have done it I hadn’t missed the turn but I’ll never know!! 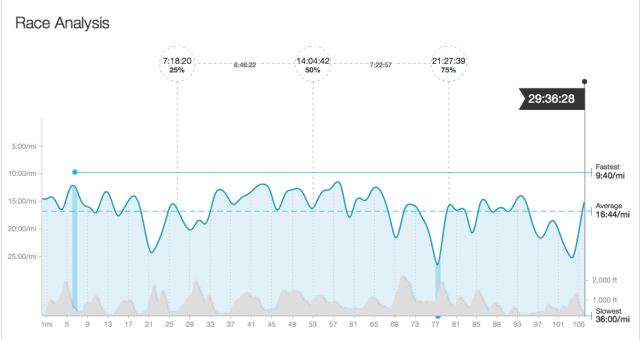 Basically I’m really happy with my tactics and really feel it is helping me to get the best performance I can.

My shin had been sore for quite a few hours during the race but it was never sore enough to even think it would stop me. When I finished the race it seized up pretty quickly and the next day was quite sore.

When I woke on Monday morning it was very sore and I decided to go to A&E just to get it checked out. The doctor reckons it is tendinitis and gave me some Ibuprofen and told me to rest it, ice it and keep it elevated.

A few days later it is definitely getting better. My next race is 8 weeks from L100 and my initial plan was to have 2 weeks of very easy running and then build up from then. So if I don’t run for 2 or even 3 weeks it is not a disaster.

I want to make sure it heals properly before I start running again. Generally I feel really good and if I didn’t have a sore shin I could easily be running again.

Over the last two years I have achieved my plan of doing justice on the Hardmoors 110 and now the Lakeland 100. I’m sure I will run them again but I don’t feel I need to as I have a time on both courses that I’m happy with!

4 Responses to Lessons learnt from Lakeland 100