I’m running again which is goo news. I ran 5 miles with Katrina on Monday and then another 6 miles today at lunchtime.  I plan another easy run on Friday and then I’m running the Castle of Mey 10k on Sunday.

I have found it a good practice to write down what I have learnt after each ultra and with a race this long you are bound to learn a few things about yourself!

So in no particular order here are some lessons from the Hardmoors 160:-

I was happy with my gear throughout the race. I wore three pairs of Sketcher Go Ultras and they were fine. The mud was tough going and I was slipping a fair bit but most trail shoes would struggle in that mud!

I wore my OMM Kamleika top off and on throughout the race. During the second night when I was struggling and not running as much I wore my warmer puffer jacket but once I got running again after Lord Stones that soon came off.

I wore shorts until Kildale (115miles) when I put on some OMM over trousers. They came off after High Paradise Farm.

This is always a tricky one but I’m happy with how I fuelled myself for the race. I pretty well kept to my plan …. 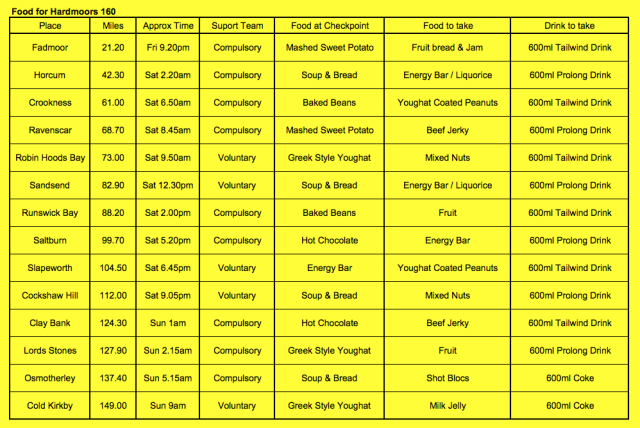 The sweet mashed potato and beans were good but the homemade soup was my favourite. I did manage to keep eating pretty well throughout the race but I was relying on liquid for the final several hours!

For drinks I alternated between ….

It was good to have a variety and each had its own taste. It is very difficult to compare and say which gave the most energy but the fact that I was able to run right to the end of the race was a sign that they worked.

I had a very definite plan to run to a heart rate of 120 which I knew would have me near the back of the field early on. That was how it worked out and after 5 miles I must have been 32nd of the 33 who started. Here are my positions at the main checkpoints …

So after almost 100 miles I was in 9th place but my struggles during the second night meant I lost a number of places. I was pleased that I was able to finish strong.

Looking back on the race did I run too fast from say 20 miles to 70 miles?  Maybe but I feel the reason why I lost places and time was more to do with other factors (ie sleep) than my pacing. The fact that I felt strong over the final 10 hours indicates to me that I did pace it okay.

I felt I was very efficient in the checkpoints. Andy & Sarah were superb in having everything ready for me so I could be in and out in under 5mins at all the checkpoints to Saltburn. During the last third of the race I was taking longer breaks but I really felt I needed them.

I would say I was in and out faster than most of the runners around me. Often I would arrive with a runner but leave on my own or with a different runner. I yoyo with a few runners. We would arrive together and arrive at the next checkpoint at a similar time but they had spent longer in the previous checkpoint and then spent the next 10 miles slowly catching up.

Which is more efficient? I’m not really sure. Gavin was one such runner who definitely took longer at each checkpoint but he went on to finish 3rd in ??? We were at Sandsend (?? Miles) at a similar time but he finished almost 7 hours ahead of me! So did the fact that he had longer rests at each checkpoint make the difference or is he just a faster/fitter runner?

I knew one of the biggest challenges of this race was going to be how I dwelt with the lack of sleep. I have done a few races around the 30hr time and I’ve been able to cope with that without sleep. I knew the second night was going to be really tough and looking back I didn’t have a plan B!

My plan A was just to keep going and hope that adrenaline would keep me going right to the end. Before the race my good friend Andy Cole said that he thought 45hrs was the limit of what can be done without sleep and he was going to watch carefully to see how I found it.

Basically I didn’t cope well at all! I felt the first 30hrs were fine. I was moving well and happy with my progress. An hour or so after leaving Saltburn I started to struggle and by the time I was going through Guisborough Woods I was in trouble. I made a couple of silly navigational mistakes which were due to being tired more than anything else.

As I made my way up Roseberry Topping with Katrina I was seeing double and I felt really tired. My legs felt okay but I was just very tired.  If you have read my race report you will know that I stopped and had a short sleep at Kildale. Even though the next 7hrs or so were still tough the short sleep was enough to get me going again and I was able to finish well.

So what did I learn about sleep?  I feel it is a bit like eating. The wisdom with food is to eat small amounts regularly throughout the race so you are continuing to top up the system. If you don’t eat for several hours you reach a point when you just run out of energy and when you do eat it takes a long time to recover.

I feel that’s what happened with me regarding sleep. I just kept on going until I reached a point when I was exhausted so by the time I did stop to have a sleep it was almost too late. Looking back I wonder if I had stopped at Saltburn (99miles) for 10-15mins and had a power nap would that have made a difference?

Then if I had another one at say Lord’s Stones (128miles) maybe I wouldn’t have reached that point when I ground to a halt? If (and it’s a big IF) I ever do a race over 35 hours again I will certainly plan to have a power nap.

One of the things you have to remember it that it is not just the hours spent running. As the race starts at 5pm you have been up for at least 8-10hrs before the race starts!  So when I reached Kildale and had a sleep I had been awake for 44hrs!! So maybe Andy is right 45hrs to about the limit!!

Another big lesson I learnt from this race is the importance of your support team. I said to Andy and Sarah the night before the race that if things are going well I’ll be fairly easy to look after. I had all my food prepared and it would just be a case of handing it over and sending me on my way!

But I was very aware that it was unlikely that everything would be going well and if that was the case then my support team would need to be able to think on their feet.

I was so pleased when Andy & Sarah said they would like to help me and I knew they would be good as they have done the race and know what is involved. But I can honestly say they were far better than good … they were the best!

They were always enthusiastic and couldn’t do more to help and make sure I made it to the end. Both of them spent many hours and miles walking/running with me as well as meeting me at the checkpoints.  I can’t thank them enough!

Katrina joined us at Saltburn after taking four trains from Paisley to get there! Katrina then joined me for 12hrs from 7.30pm Saturday night to 7.30am Sunday morning covering 25miles. They were probably my slowest 25miles of the race when I was at my worst.

Katrina was so encouraging and did all she could to keep me going. Not once did she mention that her knee was sore and she was pretty cold as she knew I needed as much positive support as she could give. What a star! Thanks

It was also great to see Dave and Tracey on Saturday afternoon and then again at the finish. Dave ran with me a couple of times and as always I enjoyed running together.

I also really appreciated the support from the marshals and other support teams throughout the race. Plus all my fellow runners. I always enjoy sharing some miles together in a race and finding out more of their story of why they run, what races they have done and what races they would like to do.

Often when I do a race for the first time I’m keen to go back and do it again so that I can learn from the first one and go faster. This race feels different. One of my aims was to see whether I could run for 160 miles and the finish was all that really mattered.

I did have my bronze (sub 50hrs), silver (sub 45hrs) and gold (sub 42hrs) goals to keep me motivated but because this was unknown territory I knew I was going to be happy with a finish!

So I don’t feel the need to do it again as I’m not sure how many times I want to put myself in the position that I have to dig so deep to be able to finish!

I still love this sport and want to continue to run races for many years to come. I have my ‘long term’ goal of running a 100 ultras by the time I’m 70!!

I’m keen to do some new races over the next few years. There are so many new ones in the UK alone so there are plenty to choose from.

I would also like to do a multi-day race and the Ring of Fire around Anglesey is going to be my main target next year. It is a 3 day event with 30miles on day 1, 60miles on day 2 and 30miles on day 3.  That will be a new challenge to see how I cope with 3 consecutive days running.

This entry was posted in Lessons learnt, Uncategorized. Bookmark the permalink.

1 Response to Lessons learnt from Hardmoors 160