Summary of Week 2 Training for Hardmoors 55

Week two of my training plan has definitely been a turning point in my training. Something has clicked this week and I feel as though I’ve been running with more of a spring to my step.

Each run this week has been encouraging as I’ve completed them quicker than last week and with less effort somehow.  I ran five times for a total of 41.79 miles.

This week it was our favourite hill reps. We have a 1.5 mile warm up run from the ON-X Sports Centre to the hill and then 10 reps of running up as hard as we can with a recovery run back down to the start. 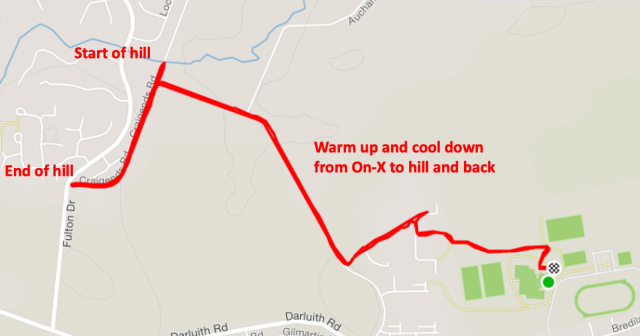 It was a very windy night so only 9 of us braved the weather. The wind was pretty tough and was at its worse as we reached the steepest part of the hill near the end of each rep!

Katrina and Mel started 50 yards ahead each time and I never caught them. Last year I was doing each rep under 2:10 but I was really happy with my effort tonight as they were all between 2:19 and 2:28 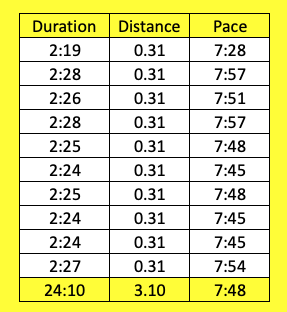 We do this session fairly regularly so hopefully I will be quicker next time!

I did the same session as last week. 1 mile easy then 1 mile at Tempo pace, repeated 3 times. I felt I had a bit more spring in my step today and the figures proved I did.

Here is a comparison with last week’s effort. I added an extra loop from last week as I was feeling good. The ground was still fairly muddy but not as bad as last week.

It was very icy when I set off so I was very careful on the pavement and the cycle track as I made my way up to the Braes. Despite this though I was feeling good and looking forward to running on the Braes.

It was pretty cold for the first hour or so but then as the sun came up it warmed up and it was a lovely morning to be out running.

My basic loop is just under 12 miles so I have to add an extra loop to make it up to 15 miles which was my target. I decided to add an out and back at the far end of the loop down towards Johnstone.

It was a good choice as it was a good path all the way down and meant I had an other climb on the way back up. The only downside to the extra out and back is I slipped on a small wooden bridge as it was so icy. Before I knew what was happening I was down. I banged my knee a bit but it seemed fine so I got up and carried on.

About half an hour later I felt my ring finger on my right hand was sore so I took off my mitts to discover the top digit was pointing to the right and I could bend it at all. It seemed pretty obvious I had dislocated it or even broken it. It wasn’t painful so I carried on with my run pausing for a couple of photos! 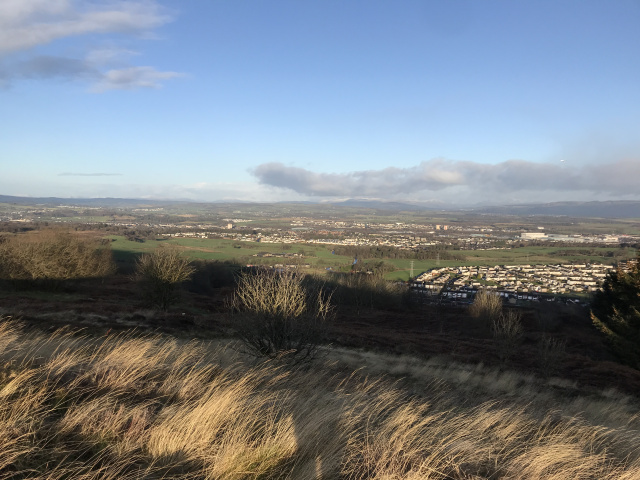 Once home I had a quick shower and some lunch and then headed down to A&E at the Royal Alexandria Hospital which is only a 10min walk away. It was very busy with lots of people slipping on the ice.

I was there for almost 5 hrs but was able to get it sorted out. I had dislocated it and there is also a small break. The doctor put it back in line as I sucked on some gas which made me feel a bit wozzy! 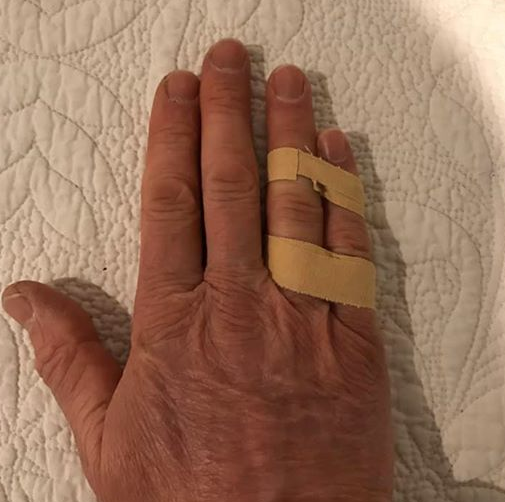 I normally like to go before church but we had Micah and Anna for a sleep over so I went after church and lunch.

A nice easy recovery run which felt easy which is good as that is the aim.