Summary of Week 3 Training for Hardmoors 55

Another good solid week. I ran four times for a total of 51.03 miles. Each run this week felt stronger and was faster than last week so my fitness is definitely coming back. It has taken a long time since the Dragon’s Back last May but I’m getting back to where I was!

This was another encouraging run. I really felt I had a bit of spring in my step and I was able to push hard right through the session. We had 8 of us so I had runners to chase and runners to stay ahead of!

Here are my stats for the session … I was pleased with how consistent I was in each of the sets and my overall pace for the 30mins was the best I’ve done for a long time!

I decided to stick to the pattern I’d done for the previous two weeks so I could compare how I was running. As soon as I set off I felt good and was really pleased that I was able to maintain a decent (for me!) pace.

Comparing the last three weeks gives me a lot of encouragement that my fitness it slowly coming back.

Two weeks ago my average pace for the Tempo effort was 8:19. This week it was 7:28 so 50secs faster. This is over the same route so gives me a chance to compare.

Next week will be an easier week but after that I’m going to increase the Tempo effort to 2 miles and so we’ll see how that goes.

I have run the same route for the last three Thursday lunchtimes but I do alternate the direction. My average pace on week 1 was 10:40 per mile. Last week was 10:04 and this week 9:42 so again I’m getting faster each week.

It more than the numbers though as I’m feeling so much better. The discomfort in my chest has almost gone. Not quite completely gone but it is not stopping me and I’m not thinking about it much at all.

I joined the West Highland Way training run. A number of runners stayed at the Oak Tree. I’m not sure how many runners we had but I reckon well over 50.

I took a video clip of everyone starting off which meant I was at the back at the beginning. I enjoyed that as it meant I was able to chat to various runners as I caught up with them.

By the time I reached Rowardennan I was in a group of 3-4 and we stayed together until the end of the low path when a few of them headed back.

On the way back I ran with Andrew who is a friend of Ian Beattie. Andrew had never ran further than a half marathon before and had never run on trails. He had cramp a couple of times but kept going well.

After Rowardennan I was still feeling good so decided to push on. I had my splits from when I ran this section 3 weeks ago so that gave me a target to go for! Thanks to Ian Minty 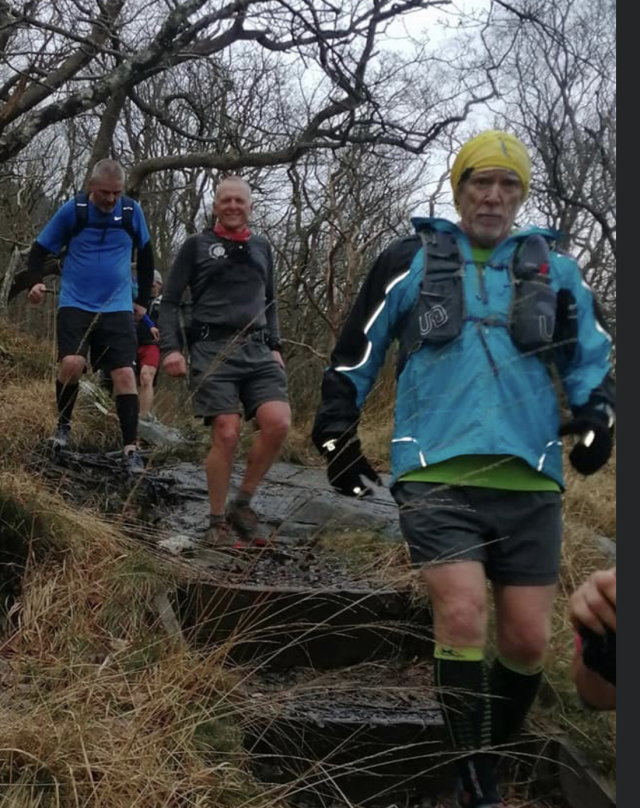 Thanks to Billy Reid

I also cycled to work on Tuesday and Friday.

This entry was posted in Uncategorized, Weekly Summary. Bookmark the permalink.