More Commonwealth and a run with Stuart Mills

On Wednesday night I had a phone call from the Results Technology Team at the Commonwealth Games asking whether I could help at the Road Cycling Time Trial.  I didn’t need asking twice so reported for duty at 7.30am at Commonwealth House.

I was in section 207 at the immediate timing post. It was a great spot as we saw the riders on the way out and on the way back. I working working with Christian from Longines. I was on the phone to the team at Glasgow Green and called out the number of the rider as they went past. Christian would press the timing button which fed back the time.  Basically we were the back up in case the automatic system failed but it felt good to be involved! The Women’s race started at 10.01 and the 32 riders set off at 1 minute intervals.  The first rider went past us at 6.4k at 10.11 and from then on for the next 30mins we had riders coming through every minute or so.

Some had caught up with the rider before them by our checkpoint.  The first 4 riders came back on the return journey as the last few were still going out but we coped with riders going both ways!

The men were split into two groups. The first group of 31 riders started at 12.31 and the second group which included all the top riders started at 14.01.  The men did the extra loop so they were all out on the loop before the first rider came by on the return journey.

We were working like clockwork and I really enjoyed it.  The only problem we had was seeing some of the riders numbers.  If they had them high up on their back we couldn’t see them when they were in the riding position.

I was able to work out the time they had taken for their loop which was interesting.  One of clydesiders who was marshalling had the bbd coverage on her mobile phone we were getting at update on how the riders were finishing.

I took a few video clips and took the following photos from that.  Geraint Thomas on the way out …. A couple of the tiers on the way back home. Geraint Thomas …. 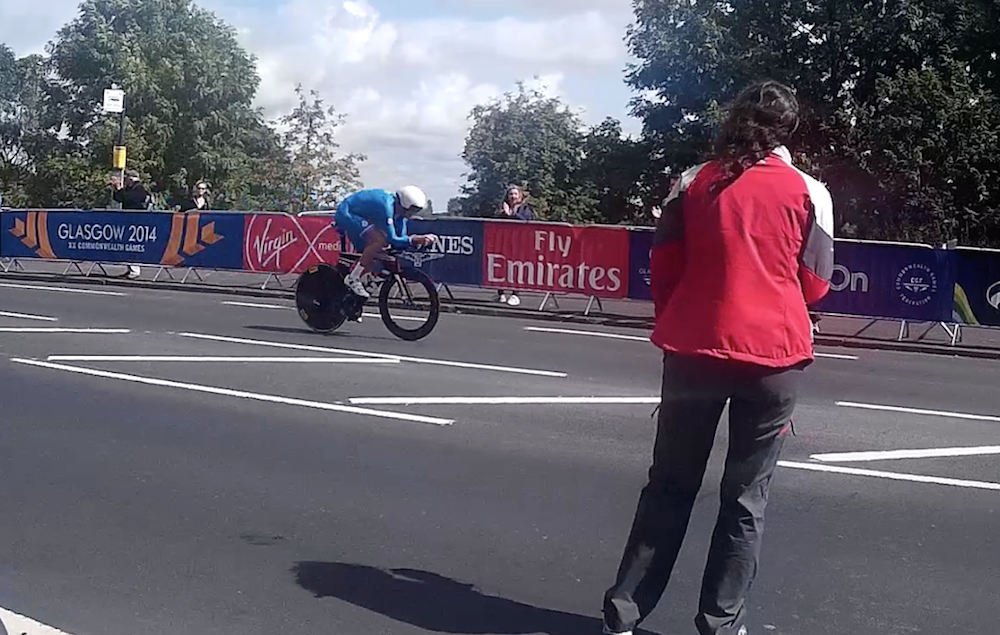 Once David Millar went through at 15.08 we were able to clear up and jump on the bus to take us back to Glasgow Green.  I really enjoyed the event and as a bonus Christian gave me a Swiss Pocket pen knife as a thank you for helping.

I arrived home in time to welcome Stuart and Francis Mills and their two boys.  They are up for the games and we had invited them for a meal.  Stuart ran the Lakeland 50 at the weekend finishing 4th in 8:25:32.

Stuart was keen for a run together so I took him up to the Gleniffer Braes and we did my 7.72mile loop.

I really enjoyed running with Stuart and we spent the whole time chatting about various topics.  Stuart has a different approach to his running than me and is well known for his ‘run as fast as you can for as long as you can’ philosophy.

Stuart did say though that he feels the key thing is that you believe that your approach is right for you. He reckons that we we have more to learn about the relationship of our mind to our performance.  I certainly agree with him on that one We had time for a photo at my trig point … Once we were back home Katrina had made a lovely meal which we all enjoyed. We then watched the Athletics from the games before they headed off to Edinburgh where they were staying.