Ready for the Fling

For my final easy run before Saturday’s Fling I decided to stick with my tradition and run a few laps around Brodie Park.  I was up and out by 6.30am. I wore my Hoka’s as I’ll be wearing them on Saturday.

I spent the run finalising my challenge that Katrina set me.  I now have  five things that I appreciate about Katrina that I’m going to tell her after each checkpoint.  Obviously I have far more than 5 but I’ll have to leave the rest until she does a longer race?????!!!!!

This will be my 6th time of running the Highland Fling and 18th ultra all together but it will be the first time I’ve planned to run with someone the whole way at their pace.  I feel quite relaxed about it as I’ll be using it as part of my build up for the Lakeland 100 race.

I think I’ll be spending more time thinking about Katrina and how she is getting on. Katrina is ready to go and looking forward to 6am and the start.  She knows it will hurt at some point but I keep telling her that it will hopefully only be the last 2-3 hours.

Up until then it should be nice and easy.  I really hope that Katrina reaches Beinglas feeling good and strong enough to be able to still run the final 12miles to Tyndrum.  The weather forecast is certainly favourable.

As you may know I like the odd spreadsheet or two and I’m realising more and more that I’m not alone.  Robert O sent me a speadsheet this week.  I have his permision to publish it so here is what he said about it …..

I have just put together a range of splits for myself though, basing it on the split ratios that Andrew James achieved, the average splits and a set of slower second half splits that are the same difference slower than the average that Andrew’s splits were faster. This gives me a likely range of splits and the potential effects of going out too fast and slowing in the second half, vs going out slow and being able to nail the second half like Andrew did. Deb’s split ratios last year were very close to Andrew’s, so both look to have stellar pacing ability. Both however were tame compared to Heather Caulderwood split ratio’s - she had a leisurely first half and storming second half.
The split ratios are simply a ratio of (time for section/total time), so for Andew they are 0.19 for Drymem, 0.27 for Drymen to Rowardennan, 0.3 for Rowardennan to Benglas Farm, 0.24 for Benglas Farm to Tyndrum.  The average ratios were 0.17, 0.26, 0.31, 0.26. 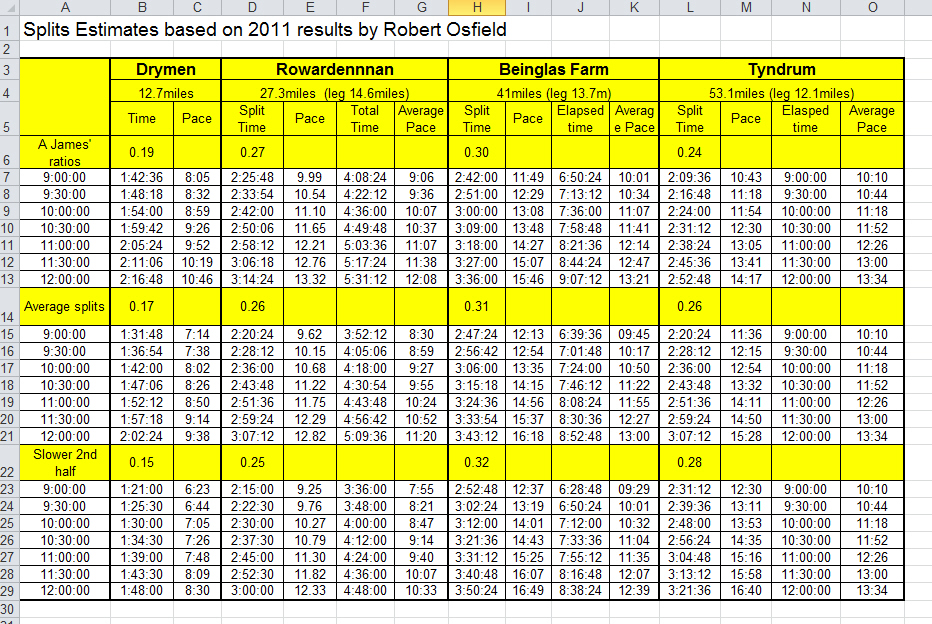 I have tidied it up a bit so if you would like to have a look please do. Thanks to Robert for sending it and sharing with us.
It reminded me that I had done something similar after the 2010 race.
So if you are looking for some help on your pacing then hopefully this will give you a bit of a guide.
So just a couple of sleeps to go before the race.  I’ll post a final comment tomorrow night after the closing time (6pm) for my ‘Guess Our Time’ Competition.

This entry was posted in guess my time competition, Highland Fling. Bookmark the permalink.

1 Response to Ready for the Fling