When I was preparing for my first West Highland Way ultra in 2007 Ian Beattie suggested that a two day run on the course would be a good idea. I have followed that advice most year’s for my long race. For the whw I would do Balmaha to Bridge of Orchy (42miles) and then Bridge of Orchy to Fort William (35miles).

In 2014 Dave Troman and I did a 2 day recce on the Hardmoors route (Kildale to Whitby and Whitby to Filey). Last year Dave, Marco and Jonny did something similar on the Lakeland 100 course.

This year I was really keen to cover the ground from Helmsley to Scalby Hills (50miles) as I’ve not run that route before. It follows the Tabular Hills route and is well marked but I always like to see what it’s like on the ground.

In all these two day recce runs I have had company but for various reasons no-one was able to join me this time. David Hetherington offered his help for day two in giving me a lift back to my car.

Often the logistics for these runs can be quite complicated but I was able to keep in fairly simple. I left Glasgow after lunch and drove down to St Helen’s Campsite at Wykeham arriving at 7.30pm. On Saturday morning I caught the 128 bus to Helmsley and ran back to Wykeham (43miles) and then Sunday I ran from the campsite to Whitby (32miles).

My cosy bed for the night

David had been out for an out and back run from Whitby. He then gave me a lift back to Wykeham where I could have a shower before driving home. I arrived home at 11pm!

I was up by 7am, had some breakfast and caught the 8.39am bus to Helmsley.

On the empty bus

It was fun being back at Helmsley just two weeks after the start of the Hardmoors 55. There were a lot less runners but just as chilly. There was rain the air rather than proper raining. I set off just after 10am and made my way up past the Football ground and on to the Tabular Hills route.

I was pleased to see that it is fairly well marked with badges and signposts but over the course of the next couple of days there were a number of places where it wasn’t so clear so I had to get out the map and follow the trace on my Suunto.

Even if the route is well marked I really like to run the course as it saves a lot of time on race day. So I took my time stopping to take photos and video clips along the way. I tried to film all the main junctions so I can go over them. I’ll put it together and post to help others as well. 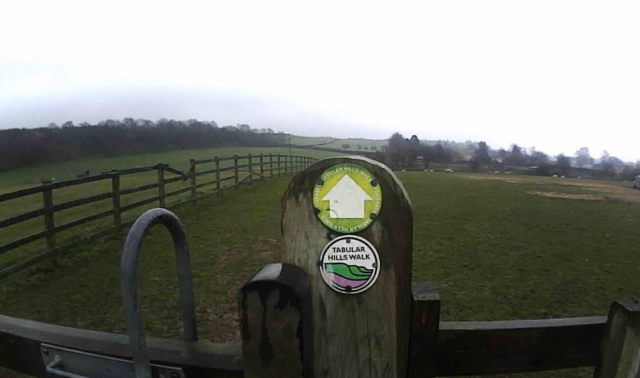 After about a mile I was on a muddy track and that was the first of many such tracks. I would say for the next 30 miles there was plenty of mud! It was quite slow going at times as it was difficult to run even on the flat and downhills. I hope we have a dry April so it hardens up the mud. But if not at least I’ll be prepared for it. 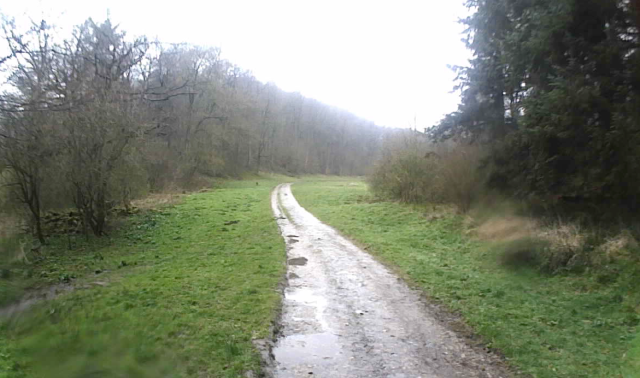 The route to Fadmoor was pretty straightforward and I made steady progress. I was keeping an eye on my heart rate but because I was stopping a lot it didn’t really help me get an idea of what pace I could manage on a hr of 120. I wasn’t too bothered about how long it was taking me as I was keen to spend time working out the route and also it was all time on feet!

Some of the paths were very muddy and slow going

There was a slightly tricky section though the woods but the signs, map and gps trace kept me right. The good thing about doing a recce is I have time to stop and work it out so on race day I can keep moving. 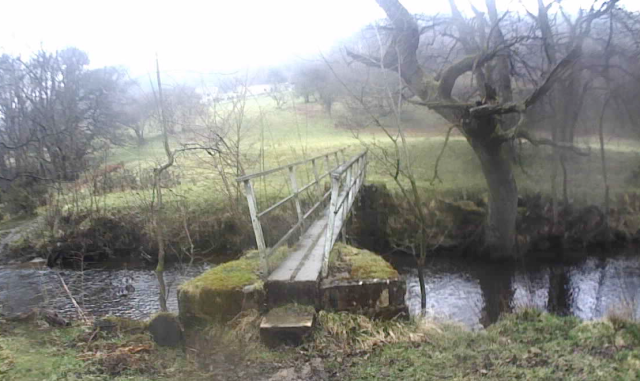 Crossing the stream at Riccal Dale

The sign posts were helpful but there are various signs for different routes so I didn’t to concentrate. 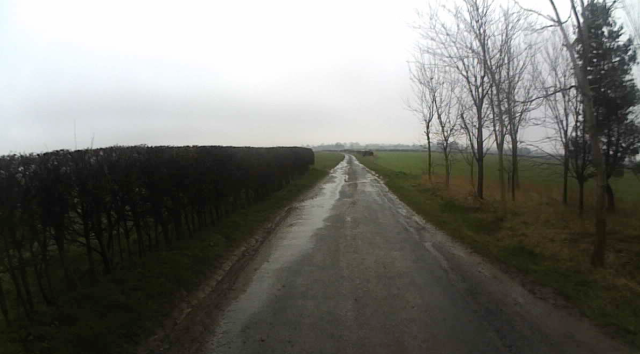 As well as the mud paths there were some solid tracks

Lots of different types of terrain 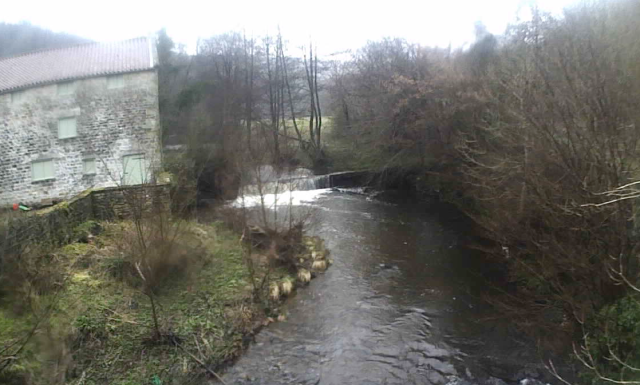 On the road towards Fadmoor

I stopped for a few minutes at Fadmoor to eat my sweet mashed potato. The weather was improving but never quite warm enough to take my jacket off!

Fadmoor where there will be a checkpoint

I was feeling good after 2hrs 30mins of running but a little concerned that a lot of the track had been very muddy which made the going a bit slower than I’d planned.

I ran along the road to Gillamoor then when I reached the church at the end of the village I made a mistake!

I went left following my pgs tracker but the actual path goes to the right of the church and then drops down to the track. I went down the road then took a right onto the path joining the track I should have taken. No big problem but must remember to go right at the church on race day!

Back on lots of muddy paths!

Route goes through the lovely village of Hutton-le-Hole

Path out of the village

Another pretty wooden bridge to cross

The route passes through lots of farms

I wasn’t too sure which way at this junction but it was straight on! 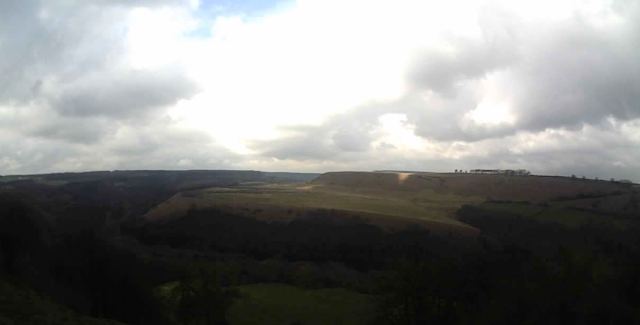 Some great views even with a cloudy sky

The next couple of miles were very slow going due to mud like this!

The Horcum checkpoint is just ahead

My Suunto ran out of battery here. I had brought my recharger but it didn’t want to work so I recorded the final 11 miles or so on the Strava app on my phone!

Enjoying the views as the sun descended and it got darker

It was getting quite dark over the last few miles so I didn’t take as many photos!  I arrived at Cockmoor Hall at about 8.30pm. I hadn’t taken a head torch as I expected to be back before this.

So I ran down the road to Snainton in the pitch dark!

It was almost 9pm by now and I was hungry! I called in at the first pub I saw. There was a sign saying food served until 9pm! I thought I had probably missed it but the chef very kindly said he would make me a bbq chicken baguette and chips.

There were a couple of guys enjoying a drink on a Saturday night. They were very interested to see hear how far I had ran. They wanted to see the map so I showed them my route!!

The baguette went down a treat. I left at 9.30pm and I still had 2-3 miles to go back to the camp site. I ran for a bit and also tried to thumb a lift. After about a mile or so I guy stopped. He was on his way to Scarborough to spend the next few hours fishing!

It was good to get back to the camp site, have a shower and settle down on our comfy mattress for a sleep.

Initially I had planned to drive the car to Cockmoor Hall and run from there but it made more sense to leave the car at the campsite and run the 5 miles or so back up to the Tabular Hills route. So instead of stopping at Sandsend I sent a text to David saying I was going to stop at Whitby which worked out fine for him. 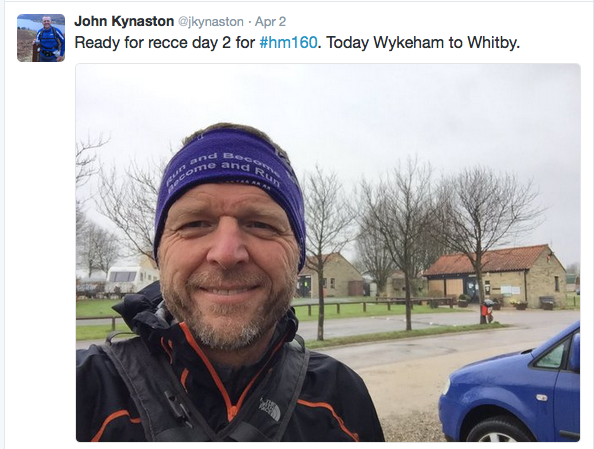 I made one silly mistake on the way up to the track but it didn’t cost too much time or distance.

It was good to get back on the Tabular Hills route and follow the signs once again. I was really pleased that my legs felt fine and I was able to run. There wasn’t much mud which also helped!

It was a good run through the forest and down the road. After a couple of hours I took off my jacket and didn’t need to put it back on again. The weather just got better and better. 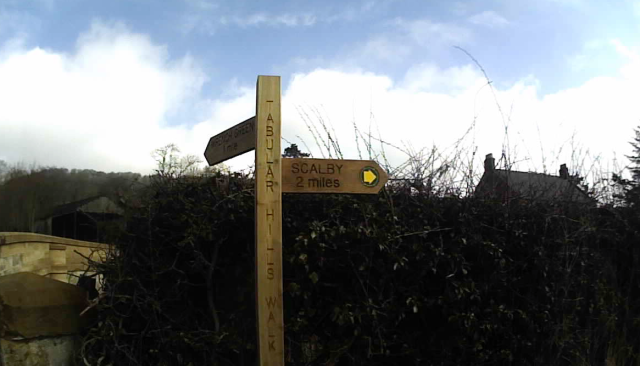 A lovely 2 miles run along the river

I sent a tweet. You can see Scarborough Castle in the distance

I knew the way from here so I was able to put away my map. I’ve been down this way a number of times now but I’ve never ran South to North so that was a bit different.

I went through a bit of a struggle mentally for a while as I felt I’d done the recce of the route I’ve not done before but I was able to get through that and get going again.

The weather and views were superb so that certainly raised my spirits. Just before Ravenscar I saaw some marshals and cyclists so now I knew what all the signs I saw the day before were for. 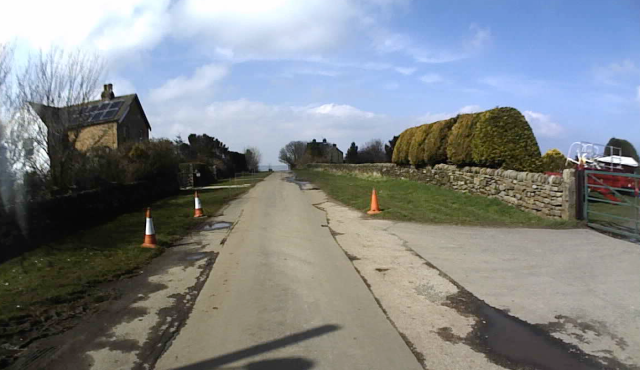 I had a quick stop at Ravenscar to eat my baked beans (5 variety pack!)

There were lots of people out walking enjoying the good weather. The track was quite muddy in places so again it slowed me down a bit but I was happy to be moving okay.

Robin Hood’s Bay was very busy so I didn’t hang around.  I knew there was about 6-7 miles to Whitby so kept going. It was strange climbing out of Robin Hood’s Bay working quite hard as others were strolling along eating ice creams.

I felt stronger than I did a couple of hours previously so was able to enjoy the last few miles and tick them off as Whitby got closer. From a few miles away I could see the lighthouse which I knew was about a mile from Whitby so that gave me a target to run to.

I arrived at Whitby after 8hrs 20mins of running. David was waiting for me so after a quick photo he drive me back to Wykeham where I was able to take a shower before driving home to Paisley.

Day 2 first half of the route

I called in at Helmsley for fish and chips and at MacDonald’s at Penrith for a hot chocolate and ice cream and arrived home at 11pm.

It was a long weekend but I really enjoyed it and was very encouraging in my preparation and build up to the Hardmoors 160 which is now less than 4 weeks away!

Thanks to David Hetherington for the lift. It was really appreciated and meant I got home before midnight.

This entry was posted in Hardmoors Recce Run, Uncategorized. Bookmark the permalink.