Since January when I felt I got going with my training for the year I haven’t done any speed work as I was cautious with my ankle after last year’s tendon injury. I felt that if I did some faster running it may well breakdown so to make sure I was able to complete the 190 mile Northern Traverse in May I decided to stick to long slower running.

Over the past week or two I felt a bit more confident that I might be able to do some faster running. So a week last Monday (6th Aug) I went along to our Kilbarchan Fartlek session. It was so good to see the group again after 18 months even though there were only 6 of us. The session was a good one to come back to. It was 10mins, 10 x 1min (with 30secs), 10mins.  The idea of the 10min runs was to try and run the second one as quick as the first.

On the first 10min run I tried to run at a steady pace and felt okay. For the 10 x 1min I ran behind my friend Donald Petrie who always sets a good even pace. For the final 10min run I was pleased that I was able to run a little faster than the first one.

It was so good to get back and I’m planning to get along as much as I can over the next few months but it will depend on what I’m doing at the weekend.

On Thursday I had a  day out in the Lakes with my friend Cammie, who is aiming to have a go at the Bob Graham round next summer. Cammie was in Keswick for the week and was planning to recce as much of the Bob Graham round as he could. I joined him for leg 2 which goes from Theldkeld to Dunmail Raise. We camped the night before and then left Cammie’s car at Dunmail Raise before driving my car back to Theldkeld.

We started running about 7.45am and had superb weather for the 4hrs 35mins it took us to do that leg. The Harvey map suggest 4hrs 30mins for that leg so I think it gave Cammie a good idea that this is going to be a tough challenge! On Saturday I decided to run the Linwood parkrun. I’ve not done this one for 18months so again it was good to be back. I tried to run sensibly early on which I felt I did. My mile splits were 6:29, 6:41, 6:39 for a time of 20:13. Katrina also had a great run just one week after running the Devil of the Highlands ultra race. I had planned to go back to the club on Monday night but most of the group were planning to run the Lochwinnoch Loosener (8k) instead. So I decided to join them. The race is part of a series of races called the Tour of Clydeside. There are 110 runners doing all the races and then another 35 running the race on Monday.

The race is along the cycle track from Castle Semple. It is an out and back course which I quite like as it gives you the chance to see all the runners as they pass you on the way back or as you pass them on their way out. It was great to see various friends running.

With so many running it was a little crowded at the start which meant I pushed a bit too hard to get past people and I was struggling for a while to keep up my pace. I was glad to see the turn round point and then tried to maintain my pace right to the finish. My mile splits were … 6:37, 6:49, 7:01, 7:03, 7:04 so not too bad! Photo near the finish by Kenny Phillips

This weekend I’m heading down to Wales for a recce run on the Dragon’s Back. I’m joining Andy again and we are covering day 2 over 2 days. I’m looking forward to seeing what this section of the course looks like. 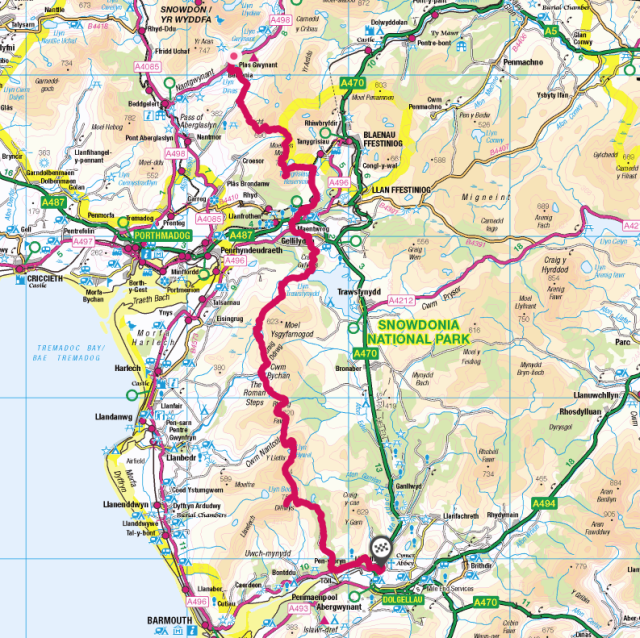 This entry was posted in dragon's back ultra, Linwood parkrun. Bookmark the permalink.