Runs and Result of my Heart tests

On Monday night I decided to join our club Monday night run as we were doing a different session and I didn’t want to miss out! Storm Henry was blowing so there were only 5 of us but Donald led us on a fun session at Houston Park.

The loop was about 0.36 mile and we did 12 loops with about a min recovery. The ground was very wet and the wind was hard work at times. I took it steady as I could feel the effects of Saturday’s long run in my legs. 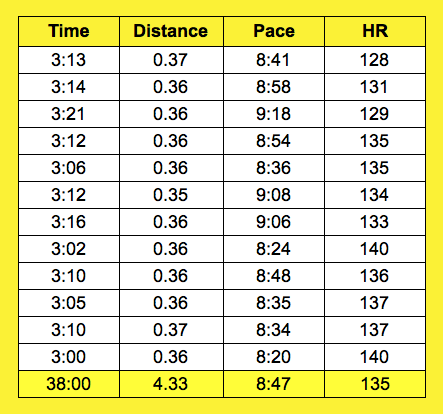 Today I went for a run at lunchtime around Pollok Park and the weather was so mild. I really enjoyed it and feel I’ve got a bit more of a spring in my step again.

Last week the consultant rang to tell me that everything is fine with my heart and my collapse was probably due to the virus that was going round our family at Christmas. So that’s all good news.

I asked whether I could see the full report and the consultant kindly sent me my ECG from New Year’s Eve when I was taken to A&E and the result of my Echocardiography.

I couldn’t really understand what they meant so posted on Facebook and a number of friends helped me understand them. I sent this to Debbie McK who is a nurse and helped me understand it ….

ECG is normal. Just slow heart rate which I would expect from an athlete.

Debbie also suggested I make sure I keep my fluid intake up and gave a helpful explanation of why that is important.

Well your echo would suggest you were a wee bit dehydrated at the time (IVC collapse on inspiration) total collapse suggests the the central venous pressure is a wee bit low. Imagine a river pushing through a narrow space the pressure at the narrowest point is high if the river is full and running with lots of water. As the river dries up the pressure lessens. Same with the IVC. The more fluid the higher the pressure. The pressure of the chest when you breathe in can press on the IVC causing it to collapse. It sounds really worrying but it’s totally normal. Would have been different an hour after a good drink of water.

I posted the results of my Echocardiography test on Facebook asking if anyone could explain what it meant? 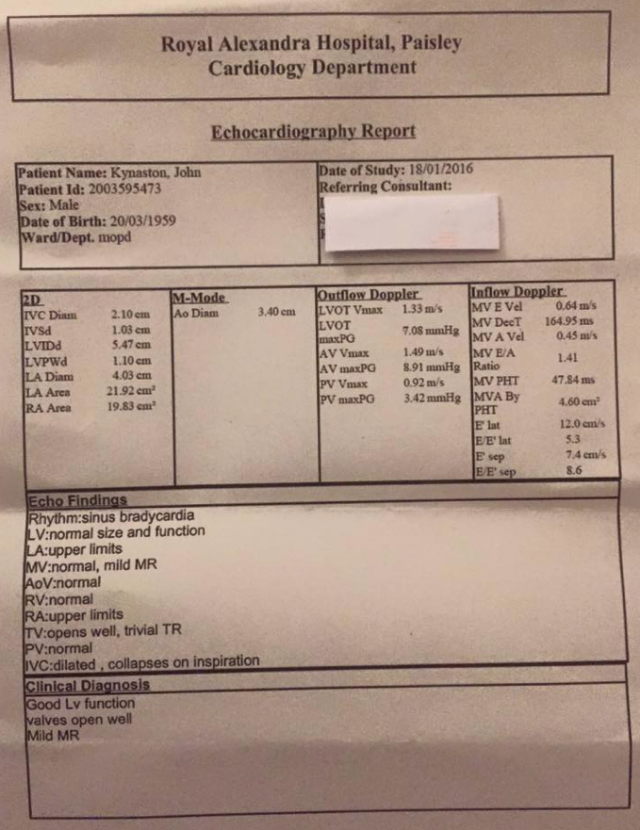 Here are some of the answers I got  ….

You have a slow heart beat, you have mild regurgitation of your mitral valve. Majority of people have this at (ahem) a certain age. Your hearts chambers are normal size and shape. Slightly larger on the right atrium but still within normal limits. Your tricuspid valve is fine with a wee bit regurgitation. This is also nothing to worry about. Your big vessel running from your heart that gives blood flow to your legs is a bit bigger than normal but you’re an athlete so no surprise. So round up basically your heart is good. Your valves are working well and your in good shape

The bottom few lines are literally the bottom line. It’s working well at a rate you’d expect and the only valvular problem is the single most common one affecting 2% of the population and is unlikely to ever cause you significant symptoms.

I perform and report echos. From the figures the right atrium is slightly big. The left atrium should ideally be measured by volume but from the figures given appears towards the upper limit of normal, this is a really common finding in an athlete. Given your symptom of a collapse the fact that there doesn’t appear to be a problem with your aortic valve or lv function is reassuring. Without seeing the images obviously this is only interpreting numbers. But nothing worryingly in the details given.

It means your the fittest and most positive man for your age this side of the big river.

So thanks to everyone who responded. It’s good to know my heart is in good shape!!

This entry was posted in Fartlek, Heart Monitoring Test, Uncategorized. Bookmark the permalink.

1 Response to Runs and Result of my Heart tests