With one week to go to my next ultra, the Brecon Beacons 10 peaks, I was keen to do a parkrun. I enjoy having a flat out effort in my taper as it gives me an idea of where my fitness is without doing too much damage.

I know a lot of people don’t like to put it out there but I like to. I try and base it on what I feel I can do and I felt this was realistic!

Katrina & Tracey had volunteered to set up the course and marshall so we arrived at the On-X Centre at 8.30am and walked round the course setting out the cones and signs. A scenario that would be repeated hundreds of times across the country and world. There are so many people willing to volunteer and support parkrun.

I still had enough time to run round the course for a warm up and I was feeling good. I had only run on Monday and Wednesday this week so with two days off I was ready to push hard.

Katrina was marshalling and also looking after Harrison so Neal & Caroline could both run. Neal seemed to be making a last minute decision but in the end went for it. He seemed to be heading down the field to start but I encouraged him to join me on the third row!

I was right behind club mate Ryan. I joked with him that I was going to try and stay with him for as long as I could as he is always about 45-60secs ahead of me.

I was right on it from the start and set off at a pace which was pretty quick for me. I normally try and start steady but decided this time to attack from the start. Within the first kilometre I got past a few runners and then there was a little gap to Ryan and a female runner who I see from the results was Rachael B.

I could hear someone right on my shoulder and suspected it was Neal. I don’t like to look behind but I felt he was having to work harder than I was! It turns out it was Neal and he was struggling to keep the pace.

I didn’t look at my watch at all but I see from my splits afterwards that I ran the first mile in 6:08. I felt okay and by the time we reached the end of lap 1 I was right with Ryan. I had gone past Rachael a few minutes earlier once we were on the tarmac.

Katrina was standing with Harrison as we entered the trail part of the run for the second loop. She cheered me on and I suspected that Ryan would now realise I was right on his tail.

I was feeling good so decided to go past past Ryan and aim for David M who was not too far ahead. I caught him as well but within another few minutes both David and Ryan had gone past me again. I reckon I stirred them into action!

Also Rachael went past me. I could feel I was starting to find this pace hard to handle! On the splits I can see the 2nd mile took me 6:20 and the final mile 6:40 was I was definitely showing down!

I was really happy with that and feel in good shape for next Saturday! 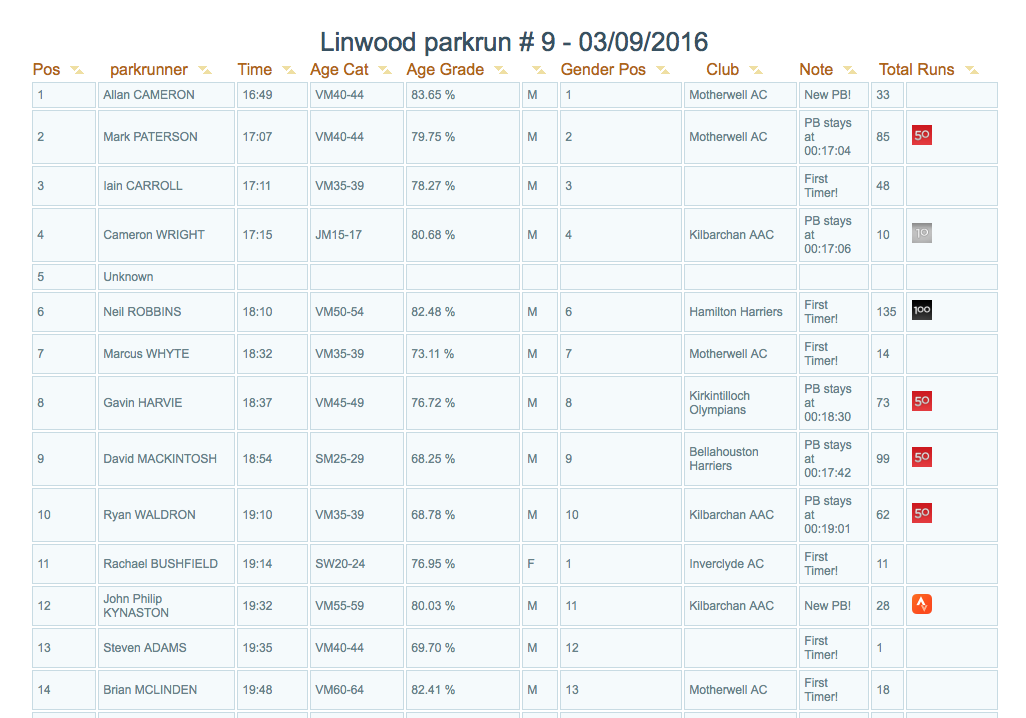 I always like to see how I got on with the age graded results…. I was 7th with 80.03% which is best for a while I think. I would quite like to see if I could get under 19mins but think that I would have to really target that and train for it. Maybe a winter project!